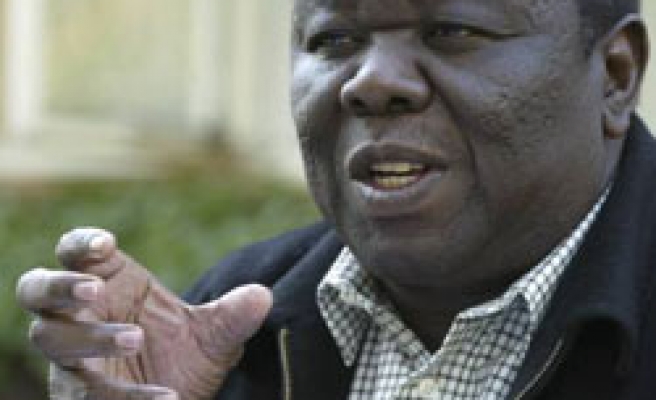 Mugabe's spokesman said the president, the only candidate, had invited Tsvangirai to his inauguration after a "sweeping victory" in Friday's poll, held in defiance of international opinion and dismissed as a sham around the world.

Tsvangirai rejected the invitation and said the inauguration was meaningless after an illegitimate poll. He said he would ask the African Union not to recognise Mugabe's re-election.

Mugabe spokesman George Charamba told Reuters the invitation was "done in the spirit of the president's wish to reach out ... It is a major step towards political engagement."

The veteran Zimbabwean leader, 84, is under pressure from within Africa to enter talks with Tsvangirai over the country's political and economic crisis.

But Tsvangirai told Reuters: "Well, you know that the whole inauguration is meaningless as far as I'm concerned, so I can't give support to an exercise I'm totally opposed to... the whole world has condemned it, the Zimbabwean people will not give this exercise legitimacy and support."

He said the opposition was committed to AU-sponsored talks with Mugabe's government although no negotiations had started.

Mugabe defied a chorus of calls to cancel the election and negotiate with Tsvangirai, who defeated Mugabe and his ZANU-PF party in a March 29 election but fell short of outright victory, forcing Friday's run-off.

Pan-African parliament observers, one of the few groups able to monitor Friday's ballot, said the vote was so flawed it should be rerun.

The government said Mugabe's swearing-in for a new five-year term would be held at 3 p.m. (1300 GMT).

The inauguration would allow Mugabe to extend his 28 years of unbroken rule before attending an AU summit in Egypt on Monday where he has vowed to confront his critics.

Mugabe was the only candidate after Movement for Democratic Change leader Tsvangirai withdrew because of government-backed violence which he said had killed nearly 90 of his supporters.

"These elections were not free and fair," said Marwick Khumalo, head of the Pan-African parliament observer team.

"Conditions should be put in place for the holding of free, fair and credible elections as soon as possible."

The United States plans to toughen sanctions on Zimbabwe and push the U.N. Security Council to act but the AU is reluctant to back this kind of action, favouring a Kenya-style power-sharing transition.

The Egypt summit may be split between critics of Mugabe, like Kenya, and opponents of any action against him led by South African President Thabo Mbeki, who has been widely criticised for taking a soft line with his neighbour.

Officials attending preparatory meetings for the Sharm el- Sheikh summit even suggested Zimbabwe may not be discussed at all, although that would provoke heavy Western criticism.

Tsvangirai was quoted on the website of London's Telegraph newspaper as saying it was possible Mugabe would be allowed to stay on as a ceremonial president with him as executive prime minister of a power-sharing government.

Mugabe has presided over the economic collapse of once-prosperous Zimbabwe, now crippled by inflation estimated to have hit at least 2 million percent.

Khumalo said monitors had recorded violence and intimidation across the country, abductions and assaults which had led to some deaths. The observers said turnout was low although a "significant number" of people had voted for Tsvangirai.

"An unusually high percentage of spoilt ballots were recorded in the polling stations where our mission observed the counting process. Unpalatable messages were written on many of these spoilt ballots," Khumalo said.

Kenya's Prime Minister Raila Odinga was quoted as saying on Sunday that the AU should deploy troops. "What is happening in Zimbabwe is a shame and an embarrassment to Africa in the eyes of the international community and should be denounced."

Nobel peace laureate Desmond Tutu dismissed the election as a charade and called on the AU leaders to refuse to recognise Mugabe. "I think that would be a very, very powerful signal, he told the BBC, calling for U.N. military intervention.