Zimbabwean President Robert Mugabe and opposition leader Morgan Tsvangirai were due to meet in Harare on Thursday after signs that progress had been made in the power-sharing talks. 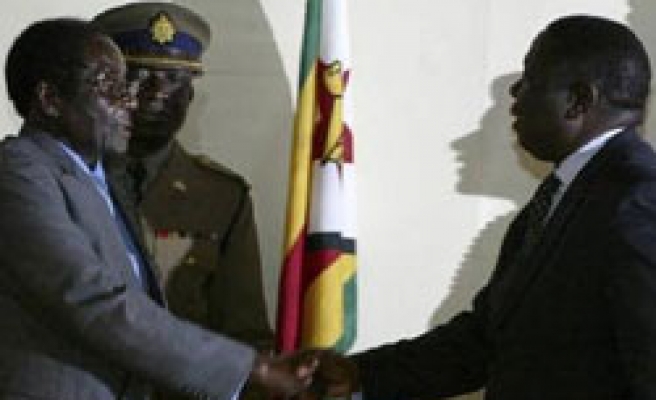 South Africa, which has been mediating to end Zimbabwe's political crisis, said on Thursday that the country's power-sharing talks were making significant progress.

"Government as the mediator will not be giving any details about details of the talks except to say that they are progressing extremely well," South African government spokesman Themba Maseko said.

Citing unnamed sources, The Star said Zimbabwe's security chiefs, seen as wielding wide power, "wanted to ensure that their interests are catered for in any agreement reached" in power-sharing talks which began two-and-a-half weeks ago.

Zimbabwean President Robert Mugabe and opposition leader Morgan Tsvangirai were due to meet in Harare on Thursday after signs that progress had been made in the power-sharing talks.

Zimbabwe's ruling ZANU-PF and the opposition MDC on Wednesday called on their supporters to end political violence in the country, the most tangible sign of forward movement in the talks since they began two weeks ago.

The two sides are under heavy international pressure, including from within Africa, to resolve a crisis that has ruined the once prosperous economy and flooded neighbouring states with millions of refugees.

The protracted political crisis has deepened frustrations among millions of Zimbabweans already suffering from inflation officially estimated at 2.2 million percent a year -- the world's highest -- and chronic shortages of basic goods.

Under a draft settlement reported in The Star on Wednesday, Tsvangirai would run the country while Mugabe would become ceremonial president.

According to the draft, Tsvangirai would head Zimbabwe as executive prime minister during a transitional period, appointing two deputies -- one from ZANU-PF and the other from the MDC.

But The Star said the MDC wants a 24-30 month transitional period, while ZANU-PF wanted it to last five years.

The opposition says only Tsvangirai can lead a new government because he won a first-round presidential vote in March before pulling out of the June 27 run-off because of violence he says killed 122 of his supporters.

ZANU-PF has said it will not accept any deal that fails to recognise Mugabe's re-election.