A 1,500 year-old church has been unearthed in Tripoli ancient city of Buldan town in southwestern province of Denizli. 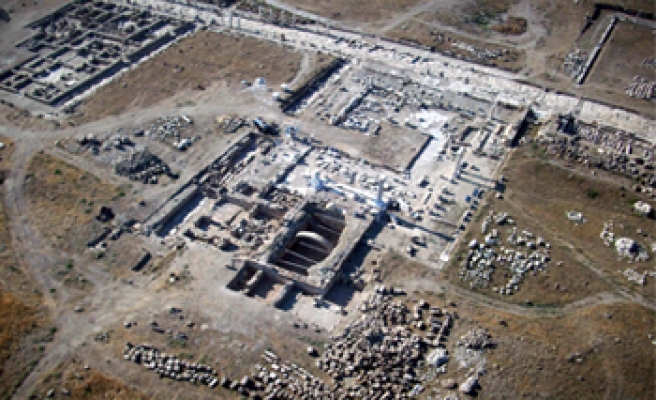 A 1,500 year-old church has been unearthed in Tripoli ancient city of Buldan town in southwestern province of Denizli and it will be opened to visitors by the end of 2013, after covered with wooden materials.

The archeologic excavations have been conducted by Pamukkale University for two years in Tripoli which takes place at the junction point of Phrygia, Caria and Lydia during Hellenistic period.

In Tripoli, a slope city surrendered with ramparts during early Roman period, a church which was undamaged till its roof level was unearthed during the geo-radar work that was conducted in 2012 in order to reveal the structures under the earth.

Chairman of Excavation Committee of Tripoli Ancient City Associate Prof. Bahadir Duman told Anadolu Agency that the traces of the first settlement in the ancient city were from the 3rd century BC and extended till Hellenistic period.

The wooden roof of the church was deformed by natural events and collapsed, said Duman, adding "After completing the restoration of this church, we will revive it as similar to its original form and open to visits soon. Another importance of the church is that it hosted religious ceremonies for 400 years from 6th century to 10th century. When we compare this church with the other ones in this region, we see that it is small, but a key one in terms of preservability."

Duman also noted that there were descriptions belonging to Jesus, Virgin Mary and twelve apostles on the walls of the church.