Ancient tombs thought to belong to the Mycenaean era of 3,500 years ago have been unearthed during an excavation being carried out by the Bodrum Museum of Underwater Archaeology 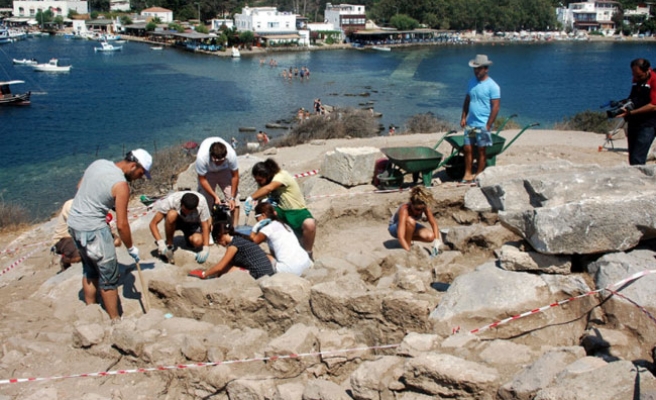 Ancient tombs thought to belong to the Mycenaean era of 3,500 years ago have been unearthed during an excavation being carried out by the Bodrum Museum of Underwater Archaeology in the Ortakent district of Bodrum, Turkish media reported on Friday.

The tombs will turn a new page in the history of the area, according to officials.

Speaking to the press, Professor Yusuf Boysal, the supervisor of the excavations, said his team so far has found the remains of several tombs, a canteen, a three-handled cup, a jug, a bronze razor, animals' bones, many pieces of glass and beads with different shapes.

Boysal added: “Along with these new discoveries, now we will have more information regarding this ancient era. These tombs and other historical ruins are very important and they will give us information about the culture of the people who lived in that era.”

In another set of recent discoveries, archeologists working at the ancient city of Komana in the northern province of Tokat discovered tombs dating back to the 11th century earlier this week. The three tombs found are thought to belong to a family -- a man, woman and child -- according to Emine Sökmen of Hitit University's archaeology department. “We found earrings and accessories, so that's why we think this is a woman's body,” she sad, speaking about one of the tombs in the group.

“We knew that there was a plot of tombs from the Byzantine era,” she said, adding that the city was once known as a temple city. She indicated that they had acquired information from the site that dates back to the 11th and 12th century

Last year, a 2,000-year-old bust of a king was discovered during excavations in the ancient city of Stratonikeia -- where the largest gymnasium in Anatolia and a gladiator graveyard are located -- in Muğla's Yatağan district. The bust, which is one-and-a-half meters tall and nearly two meters wide, features depictions of bull heads and the figure of a goddess. A total of 725 historical artifacts were found at the site of the ancient city of Stratonikeia in 2012.

Next time, give us more photos, please.Thanks