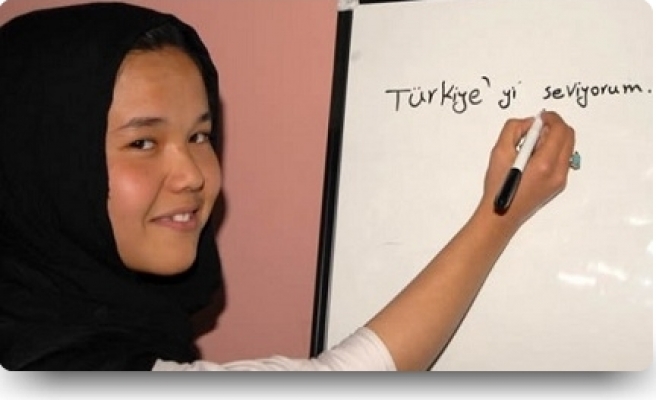 The increasing role of Turkish companies, and television, in Afghanistan mean Turkish language courses are becoming increasingly popular throughout the country.

Employment opportunities created by Turkish firms in recent years and the reasonable salaries offered by them are among the reasons that young Afghans are so enthusiastic about learning Turkish.

Turkish TV dramas are also one of the factors for their interest in learning Turkish and there are many people who want to learn Turkish just for the sake of understanding Turkish dramas.

A Turkish language student at a course in Sheberghan, Sheyma Mubariz said that she joined a course two months ago because she loves Turkish people and culture. Mina Gafuri said Turkish dramas led her to signing up.

Another student, Aga Nazar Nazari, said he was impressed by the contribution of the Turkish state to Afghanistan and therefore decided to learn Turkish.

Turkish language teacher Suaib Zafer said interest in Turkish is rising, especially in the northern parts of Afghanistan, where they have 150 students in eight classes.

Turkish language courses opened by Turkish institutions are being flocked to by Afghan students. Following Kabul University, Jawzjan University is planning to open a Turcology Department.

Jawzjan Provincial Education Director Abdulhay Yeshin said local people have observed aid provided by Turkish people to them over the years and the future generations of Afghanistan wil never forget assistance provided to them by the Turkish people.