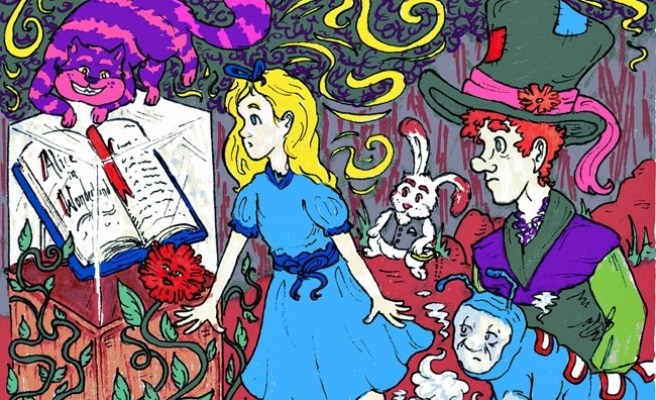 As the celebrated children's book of Britain's Victorian era turns 150, an exhibit in Texas traces its history to show how "Alice's Adventures in Wonderland" adapted and transformed through now-familiar concepts of merchandising and multimedia.

But is it just an innocent tale of a child’s dream-like adventure, or is there more to it than at first meets the eye? Since its Victorian genesis, subsequent generations have been eager to pick out hidden meanings and messages. Is it really about drugs? Was the author perhaps less benign than he seemed?

Professor Will Brooker of Kingston University London, author of Alice’s Adventures: Lewis Carroll in Popular Culture, says each generation has interpreted the text in ways that reflect their contemporary culture.

“In the 1930s it was psychoanalysis, in the 1960s it was psychedelia, and in the 1990s paedophilia,” he says. “The 1930s was when people started to take what was originally conceived as a pleasant, delightful, nonsense children’s story and thinking there must be something deeper than what’s on the surface - a Freudian interpretation.

“Then, in the 1960s people assumed Carroll must have been on the same drugs they were on because the story seemed to tally with their experiences of LSD and cannabis. They thought he was speaking their language.”

The Lewis Carroll book swept children's literature when it was published in 1865, and the popular work was soon adapted for the theater, Alice-themed toys and eventually films during the early days of the industry.

"The book did not have a conventional moral. Carroll played with standard moral tales of his day and turned them on their heads," said Danielle Brune Sigler, the curator who helped put together the exhibit that opens on Feb. 10 at the University of Texas in Austin.

The exhibit, at the Harry Ransom Center, a global leader in its holdings of manuscripts and original source materials, contains more than 200 items, including rare publications, drawings and letters and photographs by Carroll, the pen name for Charles Lutwidge Dodgson.

The exhibit shows how Dodgson, the University of Oxford mathematician who composed the story for the daughters of his Oxford dean, tried to balance his life in academics with his alter ego as the author of a widely popular book.

Dodgson was an avid amateur photographer, when the craft was in its infancy, who also dabbled in drawing. The mathematics professor also kept up correspondence with children, and the exhibit includes letters in which he challenges them with games, puzzles and codes.

His photographs, a few of which will be on display, including one of the story's inspiration, Alice Liddell and her sisters, were well received. But Dodgson knew his drawings for "Alice's Adventures in Wonderland" were not up to snuff and turned to one of the pre-eminent illustrators of the day, John Tenniel, for help.

The exhibit shows how both, at times, grew weary of Alice as its popularity grew. Dodgson reportedly often would not answer letters addressed to Lewis Carroll.

As for Tenniel, well, he was often fed up.

"I shrink at the mere mention of 'Alice in Wonderland,'" Tenniel wrote to a friend in a letter on display, referring to the book by its commonly used name.

While Carroll may have grown tired, he was also involved in marketing his product, creating an Alice-themed stamp case for children and helping to bring a production of "Alice in Wonderland" to the stage.

Meanwhile, weak copyright protection led to unauthorized publications of Alice to pop up in the United States. As the times changed, so did representations of Alice, who is seen as a flapper in a 1929 version of the book in the exhibit and a psychedelic icon in a 1960s coloring book.

Along with showing how the book became a trailblazer for children's literature, the exhibit also shows how Alice became a theme for toys. They ranged from the simple to the technologically advanced for the day, such as 1933 Movie-Jecktor filmstrips - paper strips about 3 feet long that when run through a toy projector, display a simple animation.

Carroll's work was also recorded as an early audio book. It was part of a 1958 series of 16 rpm records that included "The Wizard of Oz" and "The Trial of Socrates."

"The characters drive a lot of the interest in Alice," said Sigler, the curator, adding that many people are less familiar with the book's narrative.

"A lot of people have absorbed Alice through films, through toys and through condensed versions but have not necessarily read the original," she said. "These adaptations have been so popular, that they have often supplanted Lewis Carroll's story."