The ivy gives the mosque a unique appearance, protects it from deterioration, attracts tourists and keeps worshippers cool during summer heat. 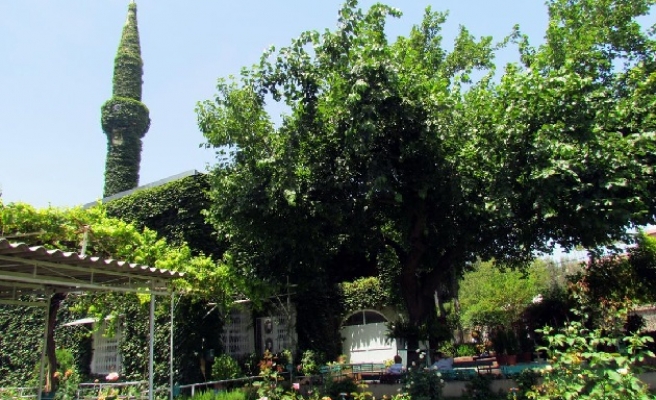 People around the world have heard of the spectacular Blue Mosque in Istanbul. But there is another mosque worthy of visitors' attention, for different reasons -- the ivy-covered Yesil Mosque, or Green Mosque, in Adana, in southern Turkey, along the Seyhan River, about 20 miles from the Mediterranean sea.

While the Blue Mosque may be more spectacular, the Green Mosque may in its way be more inviting. It is probably the greenest contruction in Turkey, with ivy enveloping its walls and a kind of botanical garden full of colorful flowers providing the fathruful with a naturally cool place to pray in the midst of the summer heat.

Unlike many other minarets which soar into the sky like sleek stone towers, the minaret of Yesil Mosque is completely covered with leaves that completely hide the the construction from view. Rather than looking like a building, the mosque looks almost like leafy garden somehow shaped like a mosque.

Known as one of the most beautiful places in Adana, Yesil Mosque charms many visitors.

Beyond providing an unusual beauty and a cool place to pray, the ivy serves another purpose: It protects the building.

The Yesil Mosque Protection and Sustenance Association is in charge of maintaining the condition of the building. And the integrity of the construction has been maintained without any restoration since 1965, when the minaret was constructed and the previous wooden building was converted into a concrete one.

“The ivy- clad condition of the mosque is an outcome of no effort," said said Kadir Or, the president of the association. "It has happened out of coincidence; but for about 40 years, we try to maintain its vividness. The ivy we had first did not drop its leaves. As it would harm the construction, we applied a new kind of ivy, bringing it from Toros Mountains. Since then, it has come to be known as Yesil Mosque and has attracted people’s attention.”

As the construction is fully enveloped in leaves, the sun's rays are unable to heat the mosque. And the ivy keeps out moisture which is very high in Adana during the summer months.

When asked whether the ivy remains same all year round, Or replied, “It drops its leaves in winter and turns into green in spring.”

Yesil Mosque which was constructed by Salih Efendi from Bosnia with Mustafa Kemal Ataturk’s support in 1930. It is under the responsibility of Yuregir Office of Mufti.

And Or tries his best to maintain the Green Mosque, and its blanket of ivy, in good condition.

“Why we do this is only for God’s sake," he said. "We try to do our best to beautify our mosque.”