Ancient fountain in Turkey met with water after centuries / PHOTO

The 28-meter wide and 9-meter tall fountain collapsed after a major earthquake around the year 650. 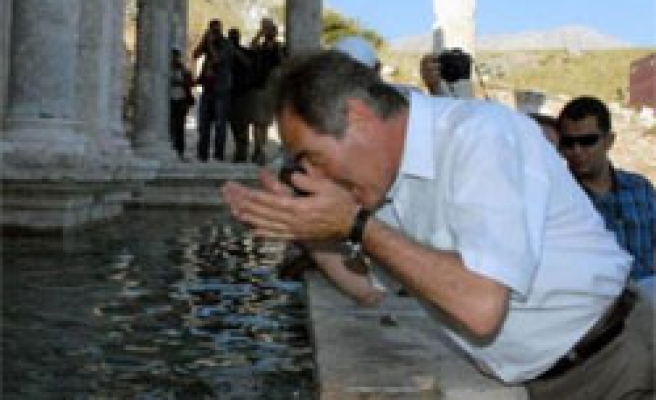 A historical fountain, which is one of the major artifacts of an ancient city located in Turkey's western Burdur province, was re-opened after a restoration process that lasted 13 years.

Speaking at a ceremony held at the Sagalassos ancient city to mark the opening of the 1,800 year-old "Antoninen Nymphaeum", Turkish Culture & Tourism Minister Ertugrul Gunay said all the historical artifacts on Turkish territory, regardless of the eras they belonged to, were the heritage of Anatolia.

"Today, without separating one from another, we are trying to protect all the artifacts just like Sagalassos and to carry them to future as the common property of humanity," Gunay said.

Delivering a speech at the gathering, Marc Waelkens, who has been the head of the excavations at Sagalassos for 25 years, said that he had given all his energy and health to this ancient city.

"However, Sagalassos made me experience the most beautiful days of my life," the archaeologist said.

The 28-meter wide and 9-meter tall fountain collapsed after a major earthquake around the year 650.

The restoration work at the ancient site started in 1998, and after nearly 13 years, the fountain met with water again.

The associated picture of Turizw Bakani is nice but is excruciatingly uninteresting. Perhaps a picture of the fountain could be included?