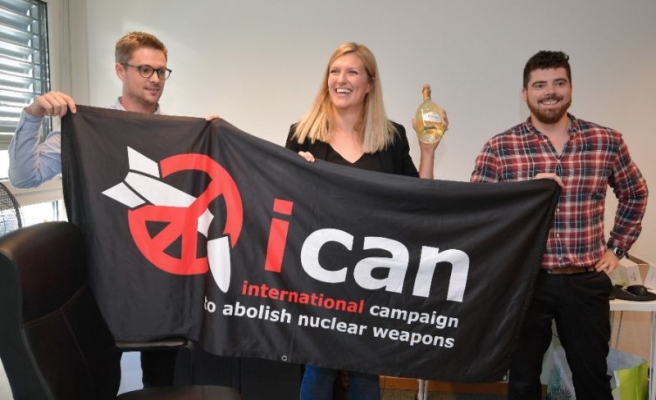 In a statement, the committee said the Geneva-based anti-nuclear weapons group had been awarded for drawing “attention to the catastrophic humanitarian consequences of any use of nuclear weapons and for its ground-breaking efforts to achieve a treaty-based prohibition of such weapons".

The Norwegian Nobel Committee also said ICAN "has been the leading civil society actor in the endeavor to achieve a prohibition of nuclear weapons under international law".

The group wrote on Twitter: "It’s a great honour to have been awarded the Nobel Peace Prize in recognition of our role in achieving #nuclearban."

ICAN is a global civil society coalition of non-governmental organizations from over 100 countries working for the prohibition of nuclear weapons.

The group -- with over 460 partner organizations -- has been "a driving force" on countries' promises to eliminate nuclear weapons in line with UN accords.

The Nobel committee said despite international bans on chemical and biological weapons, nuclear weapons "are even more destructive, but have not yet been made the object of a similar international legal prohibition.

"Through its work, ICAN has helped to fill this legal gap. An important argument in the rationale for prohibiting nuclear weapons is the unacceptable human suffering that a nuclear war will cause".