The compound which long served as the capital of the Buganda Kingdom, has also been the site of horrific atrocities. 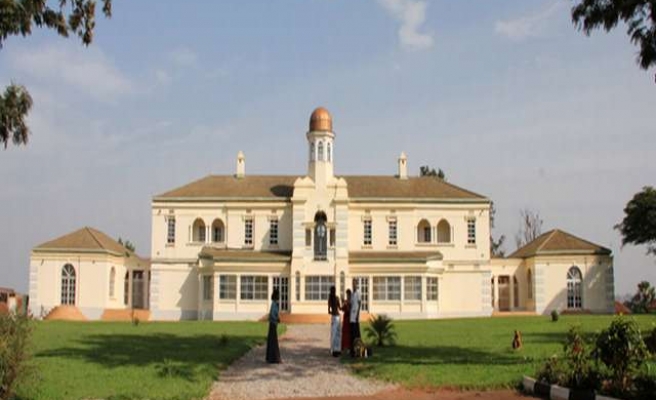 Sitting atop one of the seven hills of Ugandan capital Kampala, the Lubiri Palace – royal seat of the traditional king ("Kabaka") of the Buganda Kingdom – has seen many days of glory, along with a number of very dark moments.

The Buganda Kingdom, from which modern Uganda derives its name, is one of the oldest traditional kingdoms in East Africa, with a history stretching back 1,000 years.

Today, the kingdom covers all of Uganda's Central Region, including capital Kampala and its six-million-strong population, which accounts for roughly 20 percent of Uganda's overall populace.

Built in 1922, the Lubiri Palace, locally known as "Twekobe," sits atop Mengo Hill. The hill derives its name from the graining stones ("Mengo") in Luganda that were used by the Hippo clan – the first to occupy the land then known as Nkawo – to make flour.

Construction of the palace was ordered by Mwanga II, the 31st Kabaka of Buganda, who was the first to occupy the edifice. The two-storied palace has 28 rooms and sits on an 82-acre piece of land.

The palace, now painted white, was completed during the reign of King Daudi Chwa II, who was coroneted in 1897 at the age of four after his father, Mwanga II, was exiled to the Seychelles.

A visitor to the site is first welcomed by the "Gombolola," or royal fire, along with a long tree and a beautiful, flowered external compound.

With smoke slowly billowing from it, the fire burns day and night to indicate that the king is alive. When the king dies, the fire is immediately extinguished.

The Gombolola is now protected by a small shelter constructed of hollow, interlocking bricks and a green-tiled roof.

In line with the tradition that each of the kingdom's 50 clans has a part to play at the royal court, the Musoloza Clan is responsible for keeping the fire burning.

"Not all types of wood can be used at this fireplace. [To keep the flames burning], we have five special trees," Kyembe Tom Mukasa, a supervisor at the Buganda Tourism Ministry, told The Anadolu Agency, noting that one of them was the fig tree.

Some Baganda (Buganda people) also make use of the smoke to make requests to the gods, known locally as the "Lubaale."

"If you have a problem, you utter it into this smoke and it will take your request to the sky and the gods will answer it," Mukasa explained to AA.

"We believe that the trees used at the fireplace have some godly attributes, too," he added.

The palace has four gates, but the Kabaka uses the main gate, known as "Wankakyi." According to Mukasa, the gate, painted in black with gold decorations, was imported from India for an undisclosed fee.

Each of the three other gates – the Kalala, the Ssabagabo and the Nnalongo – has a specific cultural function.

The palace is now surrounded by a brick wall that covers eight acres of land. But Mukasa says both the gate and the wall had been made of reeds until 1997, when the palace was renovated.

As the king enters the palace, he must pass through a small roundabout with flowers on the sides, known as the "Nantawetwa." The name, which means "the one who cannot be bent or coiled," is one of the king's many titles.

Consequently, no one else beside the king is allowed to enter the palace through the Nantawetwa.

The compound, however, which long served as the capital of the Buganda Kingdom, has also been the site of horrific atrocities.

For 37 years, until 1997, the palace and its rich cultural accoutrements served as a military base known as the "Malire."

Three successive regimes – that of Milton Obote, that of Idi Amin Dada and that of the current ruling National Resistance Movement under the leadership of President Yoweri Museveni – all used the palace as a base, which sometimes also served as a notorious detention facility for dissidents.

A few meters from the gate stands an old gunship – now painted blue and white, the colors of the Buganda flag – which had been used by late king Mutesa II to flee when the palace came under attack in 1966 by troops loyal to the Obote regime.

Buganda officials recall how Obote's troops had been intent on capturing and killing Mutesa II, deploying tanks and heavy artillery. This made it difficult for the king and his defenders, who had been equipped only with small arms, to fight back.

Fortunately, the Kabaka was able to elude capture, and – with the help of several loyal supporters – was able to escape into exile.

One year later, Obote imposed a new republican constitution on the nation, according to which all forms of kingship were abolished.

In 1993, Uganda's traditional kings – including the king of Buganda – were restored after Yoweri Museveni assumed power following a coup that ended Obote's rule.

Pointing to the ruins of two vehicles in the compound's garden, a Bentley and a Rolls Royce, Mukasa told AA: "If you talk about the 1966 attack, you can't forget these two vehicles, which were bombed by the Uganda People's Congress under the leadership of Milton Obote."

"Our king had been a rich man, but the army took it all away in that attack," he added.

Upon his return to the kingdom, King Ronald Muwenda Mutebi returned to the palace, which was renovated ahead of his marriage to Sylvia Nabagereka Nagginda – now queen of Buganda – in 1999.

Only meters from the white palace, within the same compound, is a structure originally built by the Israeli government in the 1970s as an armory for the Idi Amin regime.

But for many Ugandan families, especially those from Buganda, the structure – which resembles a dungeon – became a reminder of the loss of loved ones who were taken by the authorities and never seen again.

Mukasa recalls how, in the 1980s, the structure was used by the Obote regime as a prison and torture chamber for dissidents.

He said the late leader was until now remembered for uttering the notorious phrase: "A good Muganda [a Buganda person] is a dead Muganda."

"We don't know how many people were killed in this place, because there were no documents," Mukasa said bitterly.

"They say a car would come to collect dead bodies and bring newcomers," he said. "The stubborn ones would die quickly, but – even if you behaved – death remained the only option."

Few people, Mukasa said, knew of the atrocities being committed inside the palace.

"All people knew was that if you were brought here, it was the end of your life," he recalled.

Now open and empty, the dungeon had at one point had an electronically-controlled gate, which was removed in 1997 by the Ugandan army.

The dungeon had water flowing six meters above ground, meaning that whoever was kept in the cells would be up to their knees in water.

"People were locked up here with no food, no water and no medical attention," Mukasa said.

Taking an AA correspondent on a tour of the dungeon's five cells, Mukasa explained: "These cells had sliding doors and bars. As you can see, there is writing – scrawled by prisoners – on the dirty brown walls."

One bit of writing reads: "Obote, you have killed me – but not my children."

On the outside are words written by subsequent visitors to the site.

"These were written by ladies who come and cry, believing that their husbands – who vanished during the Obote and Amin eras – were killed here," Mukasa noted.

Also on the walls are thumbprints, which, according to Mukasa, indicated prisoners' vain attempts to escape.

"People were pressing everywhere to see if they could get out. But, as you can see, these walls are really strong," he said.

In one of the cells are two flocks of bats – one next to the door and another in the corner.

"Some people believe that these bats are the spirits of the dead," Mukasa explained. "So we don't chase them away – we believe they're our ancestors."