The stage walls and entrance of a Roman-era amphitheater have been unearthed in Izmir. 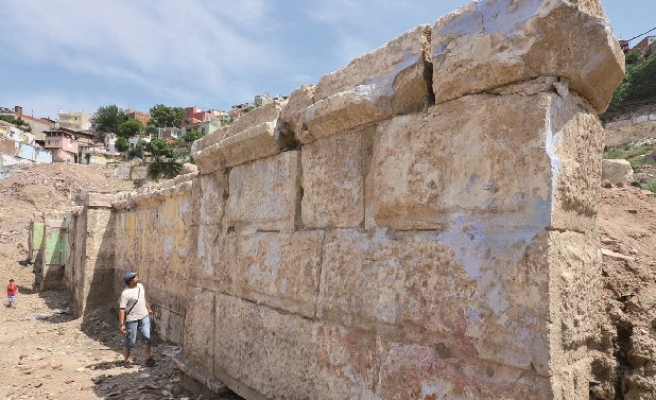 A Roman-era amphitheater in Turkey's Izmir district of Kadifekale is being revived by the municipality which will become a home to shows and concerts similar to the Ancient Theater of Ephesus.

Municipal officials noted that they have issued an order of expropriation on a 12,900-squaremeter area to unearth the ruins of the amphitheater.

So far, 137 title deeds covering an area of 11,115 square meters have been purchased and 175 buildings have been demolished. The judicial process for the expropriation of the last 15 buildings in the area is ongoing.

Archeologists will start working in the area once the demolition is over.

Austrian architects and archaeologists Otto Berg and Otto Walter can give the most comprehensive information about the ancient theater in Kadifekale due to their studies of their plans and drawings of the region in 1917 and 1918.

The study reports that according to many researchers the remains of the theater, which is thought to have held a capacity of 16,000 people, has characteristics of the Roman era.

Ancient resources claim Saint Polycarp from Izmir was killed in this theater during the early ages of Christianity, namely the paganism period of the Roman era, suggesting the theater has witnessed some tragic events in history.

After the municipality revives the theater, it will be able to be seen by those visiting the Konak, Akilsancak, Karsiyaka and Bornova neighborhoods of the city. The renovated theater will be home to shows and concerts similar to the Ancient Theater of Ephesus.