Tunisian Selma es-Subhi, who dedicated her life to the art of calligraphy, is working unwaveringly to revive this traditional art and carry it into the future. 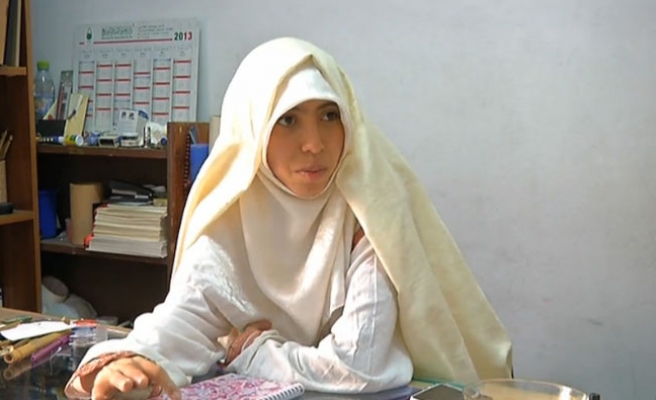 Calligraphy, defined as the art of composing letters, surely is not as popular as it was in traditional times. Yet still, there are many people around the world who dedicate their lives to the art of calligraphy. One of them is Selma es-Subhi, a Tunisian calligraphist who started to learn calligraphy when she was 17. She is now one of the few calligraphists in the country working unwaveringly to revive this traditional art and carry it into the future.

What distinguishes Subhi from other colleagues is her congenital health problem in both hands. However, this did not prevent her from becoming one of the most successful calligraphists, not only in Tunisia but also in the entire Maghreb region. In 2010, she ranked first in a regional calligraphy contest. Her talents enabled her to gain ratifications from five calligraphy masters, qualifying her to run calligraphy courses.

Mentioning that calligraphy has always been a part of her life, Subhi said she began her calligraphy education in a prestigious school where well-known calligraphists taught. Noting her disadvantages attracted her teacher’s attention, this turned out to be an advantage as the teachers increasingly assisted her in improving her calligraphy skills. Mukhtar Ali,a famous Tunisian calligraphist, was also among her teachers. “I have learned many styles of calligraphy in my first school and the following ones. My teachers always support me,” she said.

Although calligraphy is not very popular these days, the art of giving form to signs in a harmonious and skillful manner captivates many people in the world. “Each Islamic country has its own calligraphy style. I am determined to be the best to perform Tunisian calligraphy. I am also looking forward to having courses from Turkish calligraphists,” Subhi added.

Gradually building on her international reputation and experience, Selma es-Subhi also worked with Iraqi calligraphists and learned the Iraqi style.

Along with calligraphy, Subhi is also interested in gilding –otherwise known as tezhip- an Ottoman non-figurative decorative art. Due to economic restrictions she was not able to continue her education after graduating from secondary school. However, having become a calligraphy teacher herself, her artistic capabilities have aided her financially.