How do people spend their time in those countries? 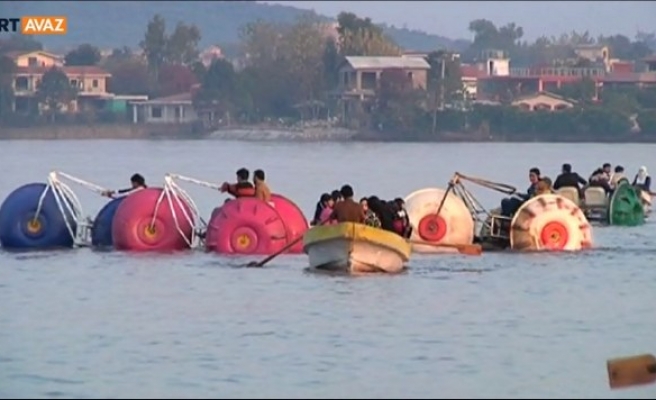 One Day in Macedonia

Most of the population of Skopje, capital of Macedonia, is consisted of the youth. The city, which is the center of culture and art, has a vivid atmosphere. Since in Macedonia most employees are the state officials, they have a lot of free time after 5 pm.

Especially the capital Skopje has a young and dynamic population because it is the center of the state and has the biggest university in the country. There are more places for entertainment as the young population is more.

This is the fact that the capital Skopje is full of cafes and restaurants. Most of the people in Skopje spend their time in these places at the end of the day or at lunch break.

During the weekend people often spend time in the city park with their families. Some go on a walk here, some attend open-air activities, others read the book at the back of beyond. But the favorite place for people who want to spend their free time reading is the libraries until the weather permits it. There are many options also for this.

The Bazaar Library in the historical Turkish bazaar is one of them. However, the library has a different concept. It serves both as a café and a library. Meaning you can read your book while sipping your tea or coffee. The Bazaar Library was opened four years ago. The interest in the library is increasing day by day. In the library serving as both the café and the library various cultural events are organized.

The owner of the library, Vegim Selimi, said of the events he had organized: “Opening up here was the joint idea with my brother. We wanted to open a place in the bazaar where people can read some books, chat and have a good time while drinking a cup of tea. Every start is hard. At first people were unaware of the existence of such a place. But interest has grown day by day especially among young people. In any case, our biggest goal is to prevent young people from wasting time and to promote their cultural activities. In this direction, we organize events such as book launches, exhibitions, and poetry performances.”

The place at the center of the Turkish Bazaar is also favorite cafe of the parents who want to have a good time together with their families in an authentic atmosphere and make them a bibliophile. In the library containing any type of book the publications are mostly Albanian. The library part of the cafe is a reference point for the young people. Students from Skopje can also find information on topics they are looking for in the library.

One Day in Albania

In Albania, coffee is an integral part of people's daily activities. As a result, most of the people living in all the cities of the country, especially in Tirana, go to the cafes. In Tirana, one of every six shops serves as a cafe. Coffee prices are also very low at these addresses, which are almost full all day long. For example, it is enough to pay one and a half lira for a delicious Turkish coffee.

Another place where Albanians have daily activities is urban parks. However, what distinguishes these parks from other activities is the frequenters. Retired people who spend time in the parks of Albania's capital Tirana, play chess and domino, and chat as a leisure activity.

An Albanian who has spent all his time with his friends spoke about these conversations and the games they played: “On the sunny days we come together in the parks. Some of us are construction or mining engineers. We even have a train driver here. Instead of being bored at home, we come here and play in the park. In fact, this tradition has always been in Tirana. Not only in Tirana but also in other cities of Albania, there are parks that are meeting places for retired people like ours.

I love playing Dominoes too. But friends do not play with me now because I came here today a little late.”

Retired ones who are not included in the game also attend to the game as viewers. While some people have the happiness of winning the game, others are complaining about being unlucky. In Tirana, the retired people who spend their daily life activities playing in the parks put a new face on the country’s culture.

One Day in Greece

Athens is a geographical region that senses the warmth of the sun and combines the iodine smell of the sea with green all year long. There are many options in the city, where the history is intertwined with natural beauty, to assess the remaining time from responsibility. Undoubtedly visiting historical sites and museums is at the top of these activities. On the other hand, all the world and his wife is happy to spend time in touch with nature.

The first thing when it comes to rest over the weekend is the coastline surrounding the city. Thanks to the beautiful weather, even in the winter months, the beach is full of people. The secrets of healthy and long life is swimming according to the people who swim for all seasons, including winter. The address for those who want to go on a walk, ride a bicycle, take fresh air in their lungs is also the coastline.

The ones sipping their coffee, walking around with their children, and working out on the coast enjoy the landscape while the sailboats float through the horizon. Some people come to the coastline on weekends to immortalize this calm landscape with their camera. What children can not give up is the kites ... The colorful kites in the sky are an unforgettable tradition in Greece inheriting from the parents to the children.

One Day in Pakistan

The capital of Pakistan is Islamabad, a city known for its green nature and dynamic parks. For this reason, families from Islamabad spend their weekend especially in the urban parks. There are a lot of activities and professions in the parks such as street musicians, monkey demonstrators, horse riding, and sandal boats. With the increase of the heat towards summer months, people prefer to go on a walk on the riverside of parks. On the waterfront, the Pakistanis take a rest, as well as having a weekend with the green nature.

Another place where residents in Islamabad spend their spare time is tea houses unique to Pakistan. Tea is an integral part of local culture in Pakistan. The type and preparation process of tea used in Pakistan varies from region to region. Each province has its own way of preparing tea. In Hayber Pashtunhuva province green tea is consumed without adding anyting, while in Kashmir green tea is prepared by adding milk. In the provinces of Punjab and Sind, mainly black tea is consumed.

The Pakistanis who meet at the tea halls have a nice time chatting and drinking tea. This tea meetings are known in the country as four o’clock tea.

Another activity of the youth of Islamabad is cricket. Cricket, one of the most important sports in South Asia, is also popular for Pakistanis. It is possible to see young people playing cricket on a flat surface on almost every corner of Islamabad. Especially after the afternoon, these street cricket matches are continuing until the evening is over. In Islamabad, where people live life to the fullest, the public continues to plan new activities for their daily routines.

One Day in Russia

The Russians, who have to live with a hard climate in a large part of the year, prefer indoor places to overcome this situation limiting their daily activities. One of the activities examplifying this situation appears in Belarus. From dentists, financial specialists, to students and teachers, many people from different social strata now tend to play strategy games. The "Moscow Under Attack: We Save Our Capital" game brings new life into the daily activities of the Russians. This game is played in groups up to eight and the organizers give a participatory task to the groups. Participants trying to fulfill the task provided by helping each other struggle to go through the process in limited time. Players travel in time and go to 1941 during the mission. They look for ways to resist the occupation with the knowledge that Moscow, the capital, is under attack by German armies.

The organizers distributing the camouflage samples used in the Second World War to the players have taken into account that the devices used are also old models. Maps, communications compasses and voice recording tools carry traces of the era.

Dimitri Arhipov, organizer, said: “Participants have a great sense of realism of the game, feeling the exact conditions of the war. In war conditions, it is necessary to overcome the difficulties in order to survive and to make progress at the same time. In the game we have tied almost every step to a solution of a riddle. Even lighting the lantern and seeing what's around you depends on finding the key. Here we channel the participants into an adventure. Children and adults spend a nice time during adventure.

They use intelligence, measure their patience and endurance, and push the limits. Of course, they have a chance to see a small part of the difficulties that our ancestors have experienced. People are tired of spending time on the computer. We offer them a real option in a big city far away from the virtual world.”

In the case of fine weather there would be more people spending more time in Moscow’s streets, although there is now a limited number of indoor performers. “Moscow Under Attack: We Save Our Capital” game looks like it will color the daily activities with different perspectives.