Ishak Pasha Palace restoration to see completion in 2013 in Turkey

The Ministry of Culture and Tourism started restoration on the palace in November of last year, allocating around TL 8 million to the project. 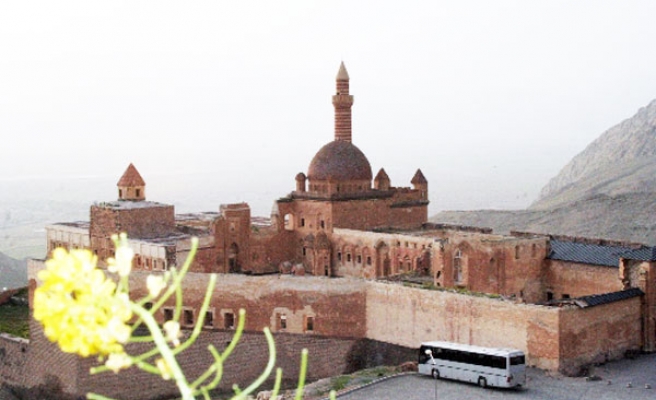 A crew of laborers is working round the clock to make progress in a total restoration of the famed İshak Pasha Palace, located in eastern Turkey's Ağrı province.

The Ministry of Culture and Tourism started restoration on the palace in November of last year, allocating around TL 8 million to the project.

İshak Pasha Palace, which is situated high on a hill five kilometers from the town of Doğubeyazıt, is a rare example of historic Turkish palaces.

Construction of the palace was started in 1685 by Çolak Abdi Pasha, the ruler of Doğubeyazıt at the time, and was completed by his grandson İshak Pasha in 1784.

The palace, which is listed as a UNESCO World Heritage site, took 99 years to complete. It is known for having the first central heating system in history. It attracts many domestic and international travelers and carries major importance in reviving tourism in the region. The structure consists of 116 rooms, a mosque, court halls, a harem section and a shrine.

The ministry's regional director, Muhsin Bulut, emphasized the importance of the project, saying: "Treasure hunters have done serious damage to the palace, especially on the observatory patio. It may not be seen as important by these people, but even a small mistake can lead to serious damage." Bulut added that their goal is to leave future generations a minimally damaged palace. The ministry hopes to finish the project by the end of 2013.