The Istanbul Center of Design and the Ensar Foundation are working with the Istanbul municipality of Ümraniye to host the first ever symposium of Islamic Arts and Geometric Patterns. It has recently commenced in the Nikah Palace of Ümraniye. 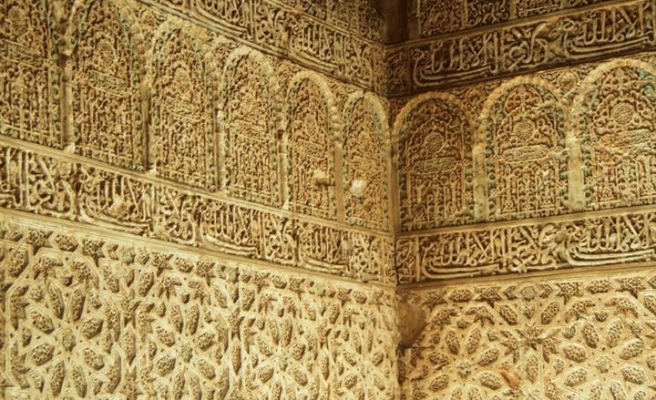 Sitting on the panel of the Islamic Arts and Geometric Patterns symposium, which started at 11.00 AM, was Carol Bier and Jay Bonner from the US, from the UK Eric Broug, from Azerbaijan Hacali Necefoğlu and from Iran Reza Sarhangi. After lunch each of the guests spoke in turns. It was interesting to note that the speakers mentioned how Islamic fine arts had influenced the world beyond Islam. Along with their oral presentations they also showed examples of how this unique understanding of fine art is evident today.

Eric Broug, who has been studying Islamic art for twenty years, spent the first part of his presentation demonstrating examples of the influence of Islamic geometric designs and patterns on modern architecture. In presenting examples from Australia, Amsterdam, Morocco and Spain, Broug put forward the similarities between designs on these buildings and Islamic art. For instance, he portrayed how Islamic geometric designs were used in Australian inns that were once built by train stations and used to accommodate commuters on long journeys. He said: ‘The building has ten layers of geometric design. It is a beautiful structure from both traditional and modern perspectives.’

Pointing to the widespread use of geometric designs particularly in the south of Spain, Broug stated that this may have also inspired industrial designs. In the second part of his lecture he used examples from the fourteenth and sixteenth centuries. In response to the question ‘What can we learn from the craftsmen of the Ottoman and Seljuk periods?’, Broug answered ‘The Seljuks did not simply imitate their predecessors. Rather, they put forward more beautiful designs. This is in the spirit of Islam. The most gifted artists innovate upon what already exists.’ Broug listed five points Islamic artists have to offer: ‘Raw talent, creativity, attention to detail, innovation and composition. In other words, drawing and decoration…I am aware that many of these craftsmen exist in Turkey. While preserving traditional geometric designs, they possess the ability to produce new, never-before-seen works, designs and arts’.

Jay Bonner, who is famous for his designs for the minber in the Ka’bah, mentioned how geometric design arrived on the scene with the rise of Islamic culture, and particularly spoke of its peak during the Seljuk era. He also gave examples from Jerusalem, Yemen, Indonesia, Turkey and the Abbasids. ‘Islamic geometric arts even influenced non-Islamic arts,’ he said before explaining his position with four points. First he showed the memorial from Armenia designed almost like a gravestone. This memorial was inspired by Seljuk designs for Christian temples. He also showed designs on an Egyptian church that were most likely crafted by Muslims. His third example was of a synagogue in Cordoba, Spain, which shows great similarities with well-known designs. Bonner later presented a unique asymmetric repetitive design of twelve stars in Peru, noting that the influence Islam had on the artistic world may in fact exceed original expectations.

The symposium, which is due to finish on 29 September, also covers a topic on Classical Methods. Seljuk Mülayim and Mirek Majewski will speak, followed by workshops run by Carol Bier and Reza Sarhangi. Mirek Majewski has been scheduled to lead a guided tour of the Şehzadebaşı Mosque. Jean-Marc Castera and Emil Macovicky are also lined to for talks, as well as further workshops by Jay Bonner and J.M. Castera, as well as a technical tour of the China Tile House. On Friday and Saturday, presentations and workshops will cover the topic of ‘Modern Applications’. The symposium can be watched online on the Ensar Foundation website.