The inevitable Ramadan tradition, Mahya have illuminated the streets of Istanbul and other cities during the holy month for hundreds of years and continue to fascinate residents as well as tourists. 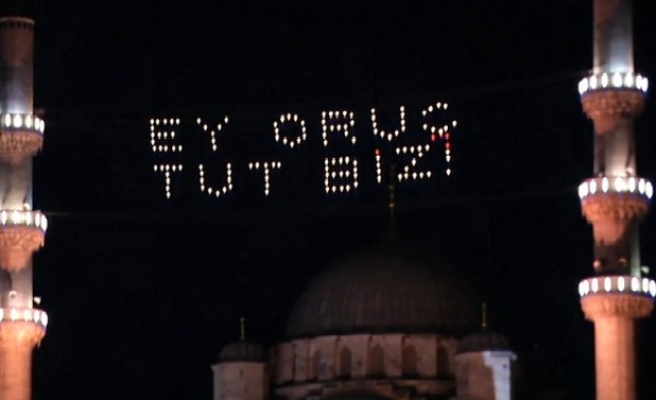 As the Ramadan arrived, the traditions associated with the Muslim’s holly month have come along. One of them is hanging Mahyas, the messages spelled out with lights strung between minarets, reflect the traditional aspect of Ramadan which is unique for Turkey and do not exist in other Muslim populated countries.

The inevitable Ramadan tradition, Mahya have illuminated the streets of Istanbul and other cities during the holy month for hundreds of years and continue to fascinate residents as well as tourists. Mahya, hung only on blessed nights and for religious festivities like the Ramadan, began appearing between the minarets of all “sultan” mosques, those built by sultans using their personal wealth. The messages given with the Mahyas are religiously significant as well as suggesting good behavior and some advises of Prophet Muhammed.

"Mahyas are changed for five times in Ramadan"

The old tradition of hanging Mahyas between minarets requires particular skill and expertise. Stating that the born place of Mahya tradition is Sultanahmet Mosque, the Blue Mosque, in 17th century, Kahraman Yıldız, a master mahya-maker for over 40 years and one of the few people dealing with this profession, said that a müezzin (the person who chants the call to prayer) of the Fatih Mosque, the calligrapher Hâfız Ahmed Kefevî, strung the first mahya between two minarets of the Sultanahmet Mosque and presented it to Ottoman Sultan Ahmad the third. “When the Sultan liked it, he ordered to hang in other Sultan mosques as well.” Yıldız noted.

As most sultan mosques had at least two minarets, they were the most suitable for stringing mahya. However some, like the Eyüp Sultan Mosque, had only two short minarets, which made it nearly impossible to string mahya. The short minarets of such sultan mosques were later replaced with taller ones, including, by the influential Vizier Damad İbrahim Paşa's order, Eyüp Sultan's in 1723.

Kahraman said Mahyas are changed for five times during the Ramadan adding that “The first mahya reads ‘Welcome to Ramadan’ but the following ones hold some hadiths and verses of the Quran. The Directorate of Religious Affairs gives us some messages regarding praying, being healthy, scientific progress. On the 27th night of Ramadan, Kadir Gecesi, the Night of Power, marking the anniversary of the night on which the revelation of the holy Quran first began, the mahyas say "Lâ ilâhe illallâh". On the last day the mahyas read as “Farewell to Ramadan.”

The mahyas have always been of importance for residents of Istanbul since Ottoman times. Minarets of the city host mahyas saying “Be aware of this month”, “Fasting keeps you away from sins” and “Welcome to Ramadan”.