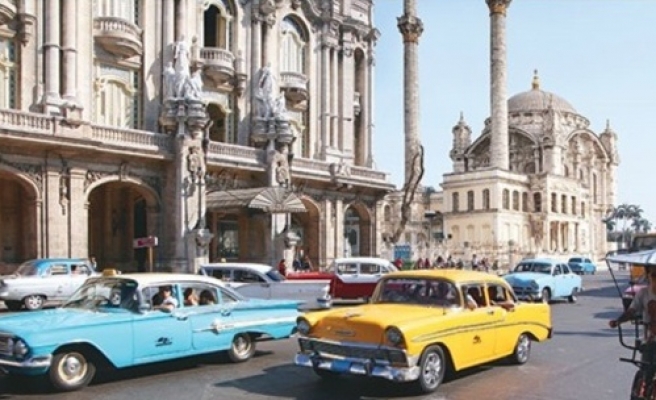 Just under the European leg of the Bosphorus Bridge, the mosque and its surroundings offer an iconic image of Istanbul that can be seen on almost all post cards that can be purchased in Turkey.

Constructed between 1853-1856 during the rule of the 31st Ottoman Sultan Abdulmecid, the mosque was restored by Turkey’s Directorate General for Foundations, an institution that was founded in 1924 along with the Turkish Republic. The directorate manages and audits foundations dating back to the Ottoman Empire under the offices of Turkey’s Prime Ministry.

Ibrahim Ozekinci, an official from the directorate, said that around 50 people were worked continuously on the restoration, and almost 7 million Turkish liras were expended during the renovation of Istanbul’s unique mosque, 'the pearl of Bosphorus.'

"It marks the transition from classical style to modern architecture, with the baroque style emphasized after Ortakoy Mosque," Ozekinci says. The mosque survived various earthquakes and fires, he adds.

"The 1894 earthquake in Istanbul did huge damage to the mosque, its minarets were demolished," Ozekinci says, adding that it was understood from old pictures that the style of the minaret had been changed after the earthquake.

"The mosque has gone under a lot of restoration projects, but the most important were under the Directorate General for Foundations in 1964," he says.

The architects of the mosque were two Armenian-origin Ottoman citizens of the Balyan Family, Garabet and Nigogayos Balyan. After receiving architectural education in France, the family had huge influence on late Ottoman architecture.

With large windows, Ortakoy Mosque has more light than most Ottoman-era mosques.

Ozkince added that the Balyan Family contributed to several other structures in Istanbul, such as the Dolmabahce Palace and the adjacent Bezmialem Mosque.