Leon Trotsky: A life in Istanbul

This weekend is the anniversary of the Russian revolutionary's unwilling exile in Turkey. 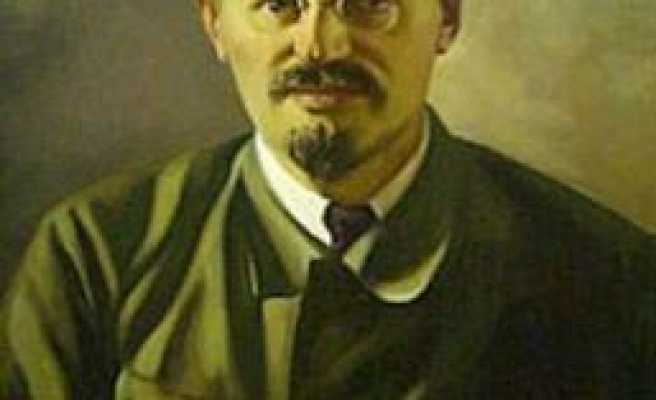 World Bulletin / News Desk
A hunted figure lost in exile, under round-the-clock security and so jumpy that he once pulled a gun on his doctor – these are the remarkable years of Leon Trotsky, Russian revolutionary and fugitive who once lived in Istanbul.

More than 80 years ago this Saturday, one of the driving forces behind the Russian revolution came to Istanbul where he stayed for almost five years, living on one of the city’s islands and penning some of his most influential books.

February 12, 1929 was when the hero of the October revolution, 49 years old at the time, set foot in Istanbul travelling under the name “Leon Sedov.”

One of the leading names of the 1917 revolution that put an end to Tsardom in Russia, Trotsky was forced into exile after a power struggle for the Soviet leadership with Joseph Stalin after Vladimir Lenin’s death.

“He did not want to come to Turkey but he was forced to,” says Halim Bulutoglu, chief of the Adalar Foundation based in Buyukada, or Big Island.

Buyukada is located off the southern shore of Istanbul in the Marmara Sea where Trotsky’s family spent most of their time during their Turkish exile.

The communist leader, who was also founder of the Red Army, was the developer of the “permanent revolution” theory which aimed to create a worldwide socialist government.

When Lenin’s former right-hand man came to Istanbul, Trotsky and his family stayed at the Russian Consulate at first, says Bulutoglu.

Trotsky biographer Robert Service wrote in 2009 that the Turkish authorities led by Mustafa Kemal Ataturk, the founder of Republic of Turkey, set some strict conditions before granting Trotsky asylum.

“Moscow had to give an assurance that no attempt would be made to assassinate him on Turkish soil. They [Turkey] also made demands upon Trotsky himself. He had to refrain from interfering in local politics and publish nothing inside the country.”

Trotsky always had the feeling that Stalin was watching for the right time to assassinate him.

One of the island’s locals was Istanbul-born Turkish-Greek Akillas Millas, now 81.

Millas moved to the island a year after Trotsky left for France in 1933. He recalls one of the anecdotes told to him when he was a child:

“The Trotskys invited a doctor when Trotsky was seriously ill, a doctor who carried his stethoscope in his back pocket. When the doctor moved to take it out, Trotsky pulled his gun on him.”

According to Millas, Trotsky did not have any contact with the local people in the island.

A Turkish specialist in Trotskyist history, Masis Kurkcugil, agrees with Millas, adding: “He did not have any influence on communists in Turkey as maybe there were around 40 left in the country after 1927’s mass arrests.”

In 1927 the government cracked down on the illegal Turkish Communist Party, detaining many members.

Trotsky had round-the-clock security on the island where he felt more protected, as the only way to reach it was by ferry.

The household’s numbers changed regularly and consisted of Trotsky’s then-wife Natali and their son Leva who helped him with his political work and daughter Zina.

There were also supporters and volunteer bodyguards who lived in the house with the family, as well as Turkish security.

Trotsky wrote two of his most well-known books “My Life” (1930) and “History of the Russian Revolution” (1932) as well as articles for newspapers during his time on the island.

He also created a “Bulletin of the Opposition” whose first issue was published in Paris in 1929, writes Trotsky biographer Service.

According to Service, he had a very strict daily routine: “He awoke early, usually at four or five o’clock, and put on a blue sweater and a pair of espadrilles before pacing up and down the corridors deep in thought.”

Millas recalls Trotsky’s fishing and hunting routines: “Sometimes the household would go fishing with a Greek fishermen called Charalambos,” and recalled hearing how Trotsky was “happy like a child” when they once caught around 40 crabs at sea.

The Trotskys had two houses in the island says Bulutoglu, but the family had to leave the island and move to the mainland after a fire in the main property.

Speculation suggests that the perpetrator could have been Trotsky’s first daughter Zina who suffered from tuberculosis and depression which led her to eventually commit suicide at the age of 32 in Berlin.

When Trotsky’s family came back to the island for second time they lived in Triandifilidis Villa which today is in ruins, with only some of its walls remaining.

The two properties that Trotsky lived in on Buyukada today belong to Turkish owners. Last year Turkish media reported that one of these would be turned into a museum but neither the culture ministry nor Istanbul municipality confirmed the reports.

Although Trotsky avoided contact with locals, he always had visitors from Western countries. His supporters came to protect him and many volunteered as bodyguards for the exiled revolutionary.

He left Istanbul when he received asylum from France in 1933, then Norway until 1936 when the family finally departed for Mexico to live in the painter Diego Rivera’s house in Coyoacan.

Ironically, given Trotsky’s high-profile role in history today, when he was assassinated in Mexico by a Russian agent with an ice pick in 1940, most Turkish communists were probably kept unawares as communism was illegal in Turkey, says Kurkcugil.