Marinaleda: An Andalusian miracle of the Eurozone crisis

The southern Spanish town of Marinaleda has been surviving uneffected by the economic crisis in the Eurozone, despite being surrounded by unemployment and corruption. 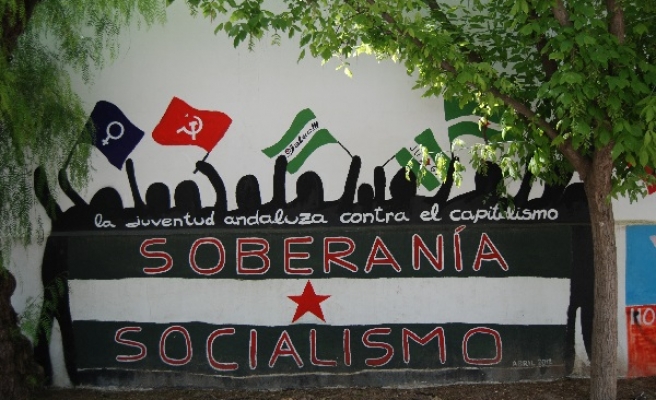 While the entire Eurozone is still struggling to shake off the effects of years of recession, which many have blamed on the capitalist banking system, life in one small town in southern Spain continues pretty much unchanged.

Spain has been a hotbed for economic corruption and currently has the highest rate of unemployment in the European Union. However, the twon of Marinaleda in the province of Andalusia has survived the turbulence with their collectivist outlook on life.

Many of the homes in Marinaleda are spray painted with anti-government slogans, such as ‘a social war against the capital.’

After the fall of the Francoist regime in Spain, the Collective for the Unity of Workers – Andalusian Left Bloc (CUT-BAI) has been winning every election in the town since its first free poll in 1980.

Local workers made a name for themselves when they successfully campaigned for a 1250 acre land owned by a rich aristocrat in Madrid to be turn into public property, with their motto being ‘whoever works on the land owns it.’

The mayor of the town, Juan Manuel Sanchez Gordillo, led the protests. After years of marches, hunger strikes and arrests, the people of Marinaleda remained dedicated to their cause.

Back then, workers were being made to work on the land for such low wages that they were forced to live in sheds, as if they were slaves. However, in 1991, the regional government of Andalusia purchased the land from the aristocrat and gave it to a cooperative set up by the people of Marinaleda.

Since then, the 2,600 residents of Marinaleda have been governing the town around this public cooperative. The town has not privatized land, and all decisions are made collectively. Any surplus wealth generated from taxes is discussed with the entire town before a decision is made on how to spend it. With the money, the town has set up a sports facility and a big public park.

All workers in the town work around 6 hours a day and earn €47 for a day’s work, which is more than enough for a town with rent rates at a mere €15 per month on the condition that they are rented for 70 years. This compares to $500 per month rates in neighboring towns.

Speaking to the Junge Welt newspaper in April 2012, town mayor Sanchez Gordillo praised his townsmen, saying ‘here we achieved everything that was possible for the people,’ adding ‘people living here don’t need much money.’

The town’s cooperative covers all tools, vehicles and manpower required to build a house, so long as the one living in the house participates in its construction. In this way, 350 homes have been built. Each home is 90 meters squared, with two floors and a 100 meters squared garden. Car garages are also included.

Families with children can send their children to the local crèche for just €12 a month, compared to €200 a month demanded by crèches in the city of Seville. Local schools provide free meals from groceries grown and produce in Marinaleda. In fact, in January 2012, when the government decided to give the responsibility of providing school meals to a catering firm, the people of Marinaleda occupied the local education ministry building and forced the government to retract the decision.

Even the mayor Sanchez Gordillo, who was first elected as mayor when he was just 25, takes his wages from the cooperative. The mayor neither owns a state-given car, nor a personally owned car. He is constantly seen walking around the town, and asks for lifts to the train station when he needs to make a journey.

Sanchez Gordillo has become somewhat of a resistance figure in Andalusia, where half of the people own just 2% of the land. A similar project was started in the district of Cordoba in March 2012, but within a month the attempt was quashed by the authorities.

Today, the town of Marinaleda continues to stand as a miracle of the Eurozone crisis, where decisions about the town are made by the people of the town.