The Portuguese built it in 1591 to watch over the port of Mombasa, then one of the richest city states in the east coast of Africaç 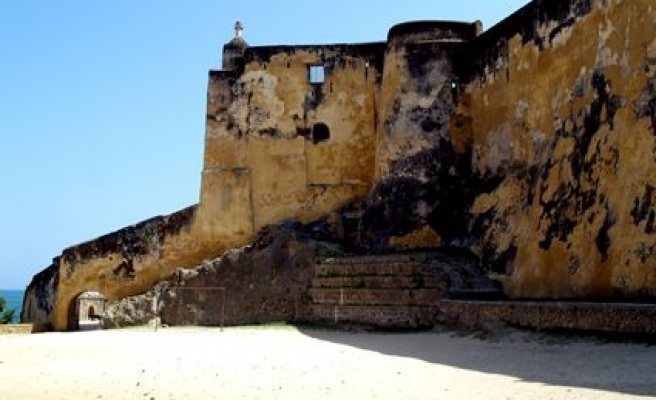 A group of Swahili and Arab boys play football on a sandy beach – a popular pastime for residents of the Old Town of Mombasa, Kenya's second largest city.

Time and again, the ball is hit out of the small beach playground, landing on an 18-meter-high sea-weathered wall that has been in place since the time of the boys' ancestors – although most of the boys are oblivious to the history of this architectural wonder.

The wall of Fort Jesus, or Forte Jesus de Mombaca, remains the only surviving evidence of the first Europeans to reach the East African coast.

The Portuguese built it in 1591 as a military base to watch over the old port of Mombasa, which had been – at the time – one of the richest Swahili-Arab city-states on the east coast of Africa.

Seen from the air, the fort has the shape of a man lying on his back facing the Indian Ocean.

"Fort Jesus is said to be the finest existing example of 16th-century Portuguese military architecture," Ali Bafadhil a curator at the fort, told Anadolu Agency. "It has changed hands many times in the past."

"The Portuguese, after two centuries, were defeated by the Omani Arabs in 1698 after a three-year siege," Bafadhil explained.

He said the Omanis heeded a call by my Swahili and Arab ancestors - had been the rulers of Mombasa as far back as 9 AD - to help them fight the Portuguese.

The Swahili people are a mixed race between early Arabs and coastal Africans who speak Kiswahili – a basically Bantu linguistic group, some 30 percent of the vocabulary of which is borrowed from Arabic, according to linguists.

In the 1880s, the British conquered Kenya and later declared it a British protectorate.

The Swahili Arabs fell under the rule of two foreign powers: the sultan of Oman, who ruled the east coast of Africa from Mogadishu to Mozambique, and the British.

Indian Ocean trade transformed Mombasa from a small settlement into a rich city-state.

Slaves, ivory, gold and wild animal hides were shipped by Swahili-Arab merchants in traditional dhows to India, Arabia and Persia – even as far afield as China.

"The main reason why the Portuguese came to Mombasa was to control [trade in] the lucrative Indian Ocean," Stambuli Abdullahi Nassir, a Swahili historian, told AA.

"Portugal was a small European kingdom; it wanted to amass wealth and be recognized as a superpower," he said.

"They also wanted to discover a sea route to India for trade, as Europeans avoided using the land route through Muslim territories – especially after Muslim rule in Spain and parts of Portugal," Nassir explained.

"Portuguese rule in Mombasa was marked by brutality and uprisings by the Swahili Arabs," said the historian.

"Animosity between the Portuguese and the locals explains why the former had a minimal impact on the culture of the coast," he noted.

"The Portuguese were more concerned with enriching their small kingdom back in Europe," said Nassir.

Indeed, over two centuries of Portuguese rule, none of the local residents converted to the occupiers' religion, Christianity.

But the Portuguese will be remembered in the history of the coast for having introduced food crops that are now part of Kenyan cuisine, such as maize, pineapple, pawpaw, cashew nut and cassava.

There are also several Swahili words borrowed from Portuguese, like "Pesa" for money, "Bendera" for flag, "Mvinyo" for wine, "leso" for women's clothing, "Nanasi" for pineapple, "Sapata" for slippers and "muhogo" for cassava, among others.

Today, the fort, which occupies an area of land about 2.5 hectares, is a major tourist attraction and a UNESCO World Heritage site.

A Kenyan flag placed on the massive seawall sways in the breeze.

At the fort's entrance, a group of schoolchildren line up to see an important part of their country's history. A couple of foreign tourists follow in their wake.

"Our visit to Fort Jesus has really made my pupils appreciate the history of our country," Julius Nandwa, a teacher from Nairobi, told AA. "This was an educative trip and an eye-opener."

"We managed to get a proper understanding of the lives of the Portuguese, the sultan of Oman and the British," the teacher noted. "It's a shame that not so much has been done to advertise Fort Jesus."

The Kenyan government has been trying to attract domestic tourists like teacher Nandwa, in a bid to fill the gaps left by dwindling numbers of tourists in the area – the result of travel bans issued by certain Western countries.

"We can no longer depend on foreign tourists," Mombasa Governor Hassan Ali Joho told AA.

Next to the fort is Mombasa's historic Old Town, which in the past has attracted thousands of foreign tourists.

But within the last two months alone, two female tourists – a Russian and a German – were shot to death in two separate incidents in the Old Town.

"As we continue to hope that western countries will lift the travel ban on Mombasa, we are looking for ways to attract the domestic market – especially the growing middle class," said Governor Joho.

Today, the historic fort also hosts the annual Mombasa International Cultural Festival. The festival is one of several initiatives launched by Mombasa's local government aimed at luring back visitors to the country.