Culture and Tourism Minister Ertugrul Günay proposed that moving the gigantic sculptures atop Mount Nemrut, which are on the UNESCO World Heritage List, to a museum in order to protected them from harsh weather conditions 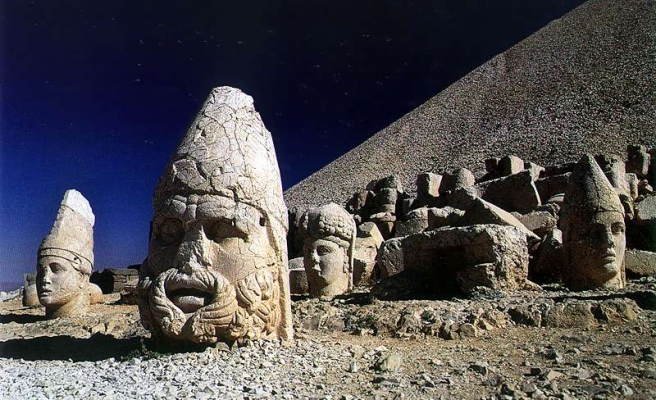 A recent proposal by Culture and Tourism Minister Ertuğrul Günay to move the gigantic sculptures atop Mount Nemrut, which are on the UNESCO World Heritage List, to a museum in order to protected them from harsh weather conditions has sparked controversy among Turkish archeologists and scientists over whether the sculptures should be preserved inside a museum or not. Günay put forth the proposal last week, saying the sculptures can be brought down from the mountain by helicopter and become part of the exhibit in a museum in Kahta, Adıyaman province.

"Many proposals, including those from [Middle East Technical University] ODTÜ, were brought to me for the protection of the sculptures on the mountain. However, none of them convinced me. Among the proposals were covering the sculptures with some chemicals. I asked them to bring me that chemical, but they could not. Some have proposed covering them with a tent or glass. Strong winds blowing on the mountain in the winter would damage the tent. The windows would break," Günay said.

Noting that the best solution would be to move the stone heads to a museum, he added that he has personally observed the damage sustained by the heads over the past 20 years and that they need protection.

One strong negative reaction to the minister's proposal came from ODTÜ's Commagene Nemrut Conservation and Development Program, which was launched with the cooperation of ODTÜ, the Ministry of Culture and Tourism, the Adıyaman Governor's Office and the municipality with the aim of protecting the cultural heritage of Adıyaman and aiding the economic development of the province by fully utilizing its tourism potential. Professor Neriman Şahin Güçhan, who leads the team, told the Hürriyet daily on Monday that there is no scientific evidence that the heads need to be moved in order to be preserved.

"All the research we have done is aimed at preserving the sculptures in their original place. We simply proposed transferring five grave stones on the mountain," she said. The professor added that her team has already produced a chemical mix to protect the sculptures and that they did submit it to the Mount Nemrut Scientific Consultation Board, established on Günay's orders. She said the council has already approved the proposal.

However, other archeologists do back Günay's proposal. "Archeological artifacts should be principally protected in their original place. However, the sculptures have been sustaining damage for a long time. Chemicals will not be enough to protect them from the elements. I also think that the sculptures should be moved," Necmi Karul, from the Association of Archeologists, told Hürriyet.

The sculptures are located near the village of Karadut in the district of Kahta, 66 kilometers from Adıyaman. At an altitude of 2,206 meters, the Commagene-era figures and constructions are known variously as the "eighth wonder of the world" and "the throne of the gods." The Commagene sanctuary on Mount Nemrut was built 2,000 years ago and features colossal toppled heads of kings and gods.