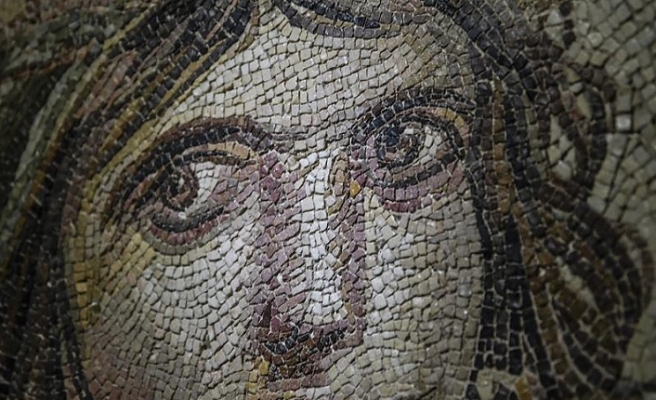 Missing pieces of famous Roman-era "Gypsy girl” mosaic are set to be back its original place in Turkey's southeast in the following days.

According to information compiled by Anadolu Agency, pieces of the mosaic were found in the ancient city of Zeugma in Turkey’s Gaziantep province in 1998 when an ancient column, which had fallen down, was lifted.

However, the rest of the mosaic pieces which were not under the column had been found by some people while making unauthorized excavations in 1960s and those parts were smuggled abroad.

Years later, it was found that the mosaics were being exhibited by Bowling Green State University in the U.S., and the university had bought the mosaics for $35,000.

A research conducted by Stephanie Hooper in 2012 revealed that the mosaics were originally from the Turkish ancient city or Zeugma.

Then, a report prepared in the same year by Zeugma excavation team head Prof. Kutalmis Gorkay proved that the mosaic pieces in the U.S. were the stolen parts of "Gypsy girl", and Turkey officially requested the return of them.

After five and a half years of negotiations with the university, Turkish Culture and Tourism Ministry and Bowling Green State University signed a protocol in May this year regarding the return of the mosaic pieces.

Turkish Culture and Tourism Minister Mehmet Nuri Ersoy announced on Oct. 31 that the mosaic pieces will be brought to Gaziantep from Chicago on Nov. 26.

The pieces will be exhibit temporarily at a platform in Zeugma Mosaic Museum in Gaziantep. Later, they will be restored to their original place and will be opened for visitors.