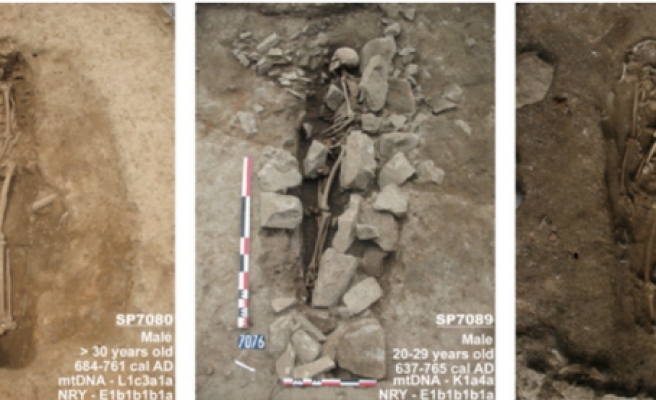 Known today for its beautiful waterways and well-preserved Roman architecture the French city of Nimes was in the seventh century known to be the prizein a battle between Roman soldiers, Gothic tribes, and the well-organized forces of a new political superpower known as Islam.

A recent discovery by archaeologists have discovered the first evidence that Muslims lived in Nimes during the early expansion of Islam across North Africa and Europe. Three newly discovered graves—the oldest Muslim graves in France— provides a glimpse of what life was like in a medieval city where locals were a mix of Christians from Rome, local indigenous tribes, and Muslims from Africa.

The team of French archaeologists have described the graves that were  found in an area that was once enclosed by a Roman-style wall from the days when Nimes was a key outpost in Septimania, on the western fringes of the Roman Empire.

The three Muslims buried at Nimes were given the treated in exactly the same way as other members of the community, at least in terms of where their graves were located. There were few formal graveyards, so most people just buried their dead outside town. The Muslim graves were close enough to the town center that the archaeologists believe these were not isolated or shunned people—indeed, they appear to have been three men who died of natural causes, who were buried by a community familiar with Islamic tradition.

All three bodies were interred lying on their right sides, facing Mecca. Two were buried al-lahd, their bodies placed in a niche dug into the right side of the grave itself, their backs against brick. One was buried al-shaqq, directly in a trench that was lined and topped with stones taken from the Roman wall  Not only are these two burial practices still common today among Muslims but the same practice has been found in  medieval Muslim communities in Spain. None of the skeletons show any signs of combat trauma, and their bodies seem to have been treated with respect after death.

The researchers point out that these graves confirm what had been, until now, only known from historical writings about the period. Muslim writers such as the anonymous author of the Chronicle of Moissac describe a city called Niwmshû or Namûshû, known today as Nimes, where there was a Muslim presence in the mid-eighth century. In 724 or 725, the city surrendered to Anbasa b. Suhaym al-Kalb, governor of a region called Al-Andalus that later became part of Spain.

Based on this information, along with carbon dates of the bones in the graves, the researchers surmise that the individuals were soldiers who may have settled in Nimes after Anbasa's victory. Supporting this interpretation is genetic analysis of the bones, which suggests that the soldiers had parentage hailing from North Africa. Many North African Berbers were converted to Islam during this time, joining the Caliphate's armies and spreading into Spain, France, and Italy.

As the researchers put it in their paper, these graves "support the complexity of the relationship between communities during this period, which cannot be summarized in a simple opposition between Christians and Muslims."  and shows a window to how medieval diversity would have been like.