An Ottoman-era banknote has appeared after 139 years, in a lot sent by a collector in Germany for evaluation. 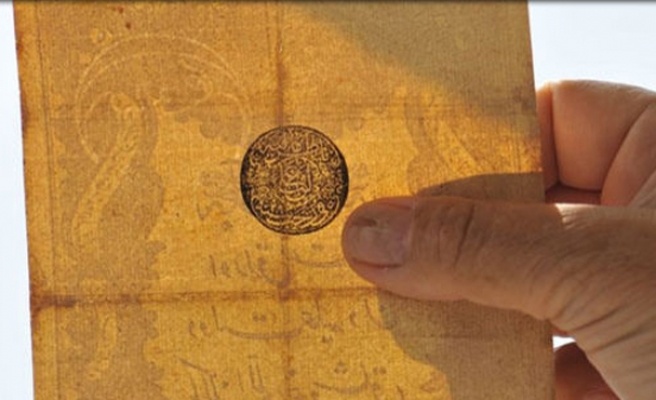 Mehmet Tezcakin, a Turkish expert on banknotes and coins, found an Ottoman-era 50-kurus (piaster) banknote in a lot sent by a collector living in Germany for valuation.

An adviser to an international London-based auction company Spink, Tezcakin said the banknote was dated 1876 with a picture as a watermark.

"I cannot tell the excitement I felt at that moment as all the numismatists in the world are after this banknote," said Tezcakin.

"That a banknote with a picture watermark was printed has been known for over a hundred years, but it had never before been seen," said Tezcakin.  Few of such watermarked banknotes with pictures were minted.

He said when the banknote was held up to the light, a man is seen, whose eyebrows and nose resemble Ottoman Sultan Abdulhamid II inside a crescent on the banknote.

"During the Ottoman era, no picture could be found on banknotes for religious reasons," he added.

Tezcakin said he made this historic find public with the permission of the collector who asked not to be named.

"This invaluable unique piece will be put up for sale abroad soon and, in particular, American, Arab and Israeli collectors will show interest in the banknote," said Tezcakin.

He called for bringing the banknote, which he said was the most precious banknote of Turkish finance history, back to Turkey.