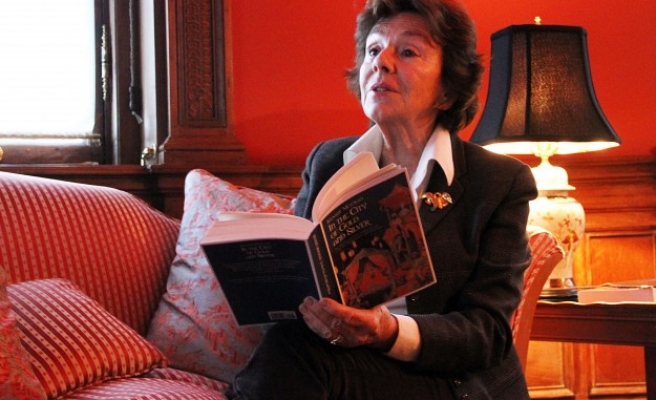 A strong Muslim Indian woman who stands against British colonialist in 19th century India is the dynamic of the latest novel by the granddaughter of Ottoman Sultan Murad V.

Kenize Mourad’s “In the City of Gold and Silver,” tells the story of Begum Hazrat, who stands bravely against the East India Company, but is eventually forced into exile in Nepal.

Begum is an orphan and poetess who gains the attention of the Indian ruler, and finally becomes his wife. From this powerful position, Begum is a central figure to lead the uprising against British colonialist in India.

Mourad uses the Begum’s story as a platform to counter "the misperception of Eastern women by Western orientalists," she said. “Muslim women are characterized as veiled and shut in the house, passive in daily life.”

But Mourad goes even further and offers that “Women in India are much more powerful than modern women in the West.”

"The perception against Muslim women, from the West, is often wrong because one in the West always sees Eastern women as veiled, kept in the house, and Western women feel that they are more free and superior,” according to the author. “They talk loudly. Eastern women on the other hand do what they want to do by talking softly.”

She cites the example of a Tatar proverb to put a finer tip on her point. “Man is a head, and women is a neck. The head goes where the neck wants it to go. That is the Eastern woman’s position in most of the Eastern countries, as I see this in India very much."

Mourad, whose mother was a Turkish princess and father was Indian raj, grew up in the diaspora after her mother was forced to move to Paris but died shortly thereafter.

Her bestselling “De La Part De La Princesse Morte” (Regards from the Dead Princess: Novel of a Life), has sold more than 3 million copies in France and tells the story of the end of the Ottoman Empire through the eyes of Princess Selma, her own mother. It has been published in 30 languages.

She was raised by a French Catholic family, but started to learn about Islam later in life.” Islam gave much more right to women during the prophet Muhammad’s time, like the right to divorce; those who complained against their husbands to the prophet for not been taken care of are given permission to divorce, which was an important step by that time,” she said.

As time passed, because of misunderstandings, “women were kept under the power of men.”

Perhaps these misunderstandings and their results have caused her to have such a strong view of women’s roles in society.

“Invisible power,” is how she describes the woman’s role in daily life. “When I went to India for the first time when I was 20 years old, I was surprised, as I was there as a westerner, but soon after, I got a sense of inferiority of all the women I met, because they were strong, and they were so powerful." she said. "And all my superiority, I became no more than a ‘westerner.’”