The mosque, tipped to be the largest in Sub-Saharan Africa, has been built on the elegant Ottoman style of the Selimiye mosque in Turkey, which is currently a UNESCO World Heritage Site. 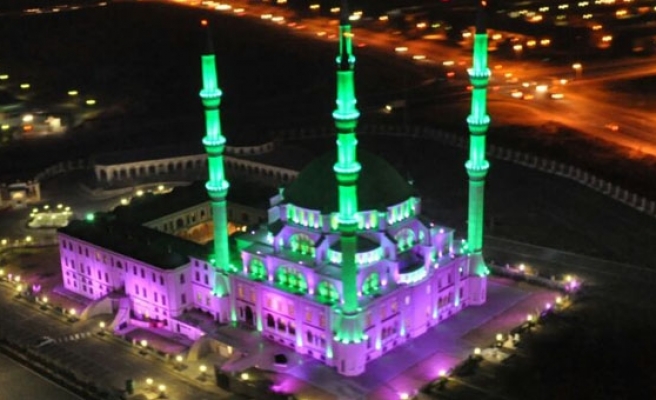 The Nizamiye complex, which is located in Midrand, north of Johannesburg, features a mosque, a school, a clinic and a shopping center.

The mosque, tipped to be the largest in Sub-Saharan Africa, has been built on the elegant Ottoman style of the Selimiye mosque in Turkey, which is currently a UNESCO World Heritage Site.

The mosque has a main 31-meter-high dome covered in lead, in addition to 4 half domes and 21 smaller domes.

The main prayer hall can accommodate nearly 6,000 people, not to mention a special prayer space for women.

The mosque has become one of Johannesburg’s landmark sites and can be seen 6 kilometres away on the Johannesburg –Pretoria highway.

Celik said Ali Katircioglu, a 74-year-old Turkish philanthropist, initially wanted to build the project in America but one of his friends advised him to bring the project to South Africa where it would benefit many needy people.

The mosque, whose construction began in October 2009, was officially inaugurated by South African President Jacob Zuma on 4 October 2012.

The complex features a school, a clinic and a shopping center.

The Nizamiye primary and high school, which officially opened eight months ago, is located on the right side of the property.

‘‘We strive to be the best science school in Africa,” school principle Isakh Turan told AA.

“We have well stocked science laboratories and computer labs."

The school currently has 200 students; half of them have been given educational bursaries because they are from poor families.

‘‘Our school aims to help students from poorer backgrounds to excel in education, so we keep on offering bursaries to deserving students,” said Turan.

On the south-east of the property is a clinic built to serve students, workers and people living near the Nizamiye complex.

‘‘When Ali Katircioglu started construction of this project, Nelson Mandela contacted him and requested that Katircioglu builds a clinic on the complex that would serve people outside the complex,’’ said spokesman Celik.

He said the ailing former South African leader was a friend of Katircioglu.

On the left side of the property there are smartly built shops designed in Turkish architecture.

There is also a cemetery to bury Turkish nationals who die in South Africa.

This being the holy month of Ramadan, the mosque offers free meals to 300 worshipers who break their fast at the mosque every day.

‘‘I praise Allah for all the good things he has done for us,” Ebrahim Atasoy, the mosque imam, said.

“Our mosque receives hundreds of worshipers for Taraweeh during this holy month and we manage to feed so many people in Ramadan.”