A Palestinian artist Shadi Alzaqouq was ordered to leave after after placing a bed sheet over his work advocating the boycott of Israel protesting the illegal occupation. 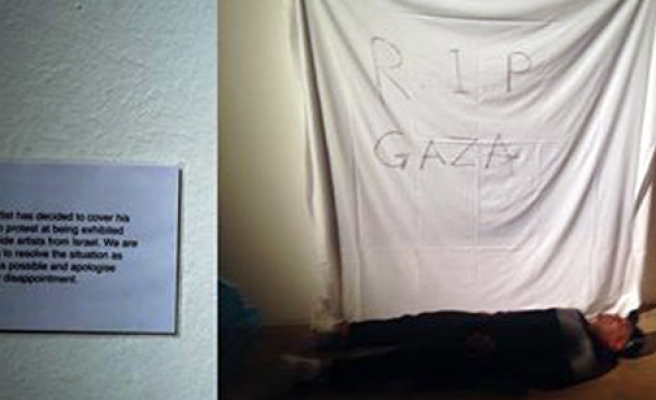 A Palestinian artist, Shadi Alzaqouq, has been expelled from Banksy’s Dismaland theme park after he protested against the presence of Israeli artists.

Shadi Alzaqzouq was ordered to leave the new “bemusement park” after placing a bed sheet over his work with the words “R.I.P. Gaza: Boycott Israel” written in coal and lying down “like a corpse” in front of his exhibition.

Initially, Dismaland organizers initially said they would remove the artists’ work, but changed their mind and placed a sign next to his exhibition explaining Alzaqzouq’s reasons for covering his art and expressed hope a resolution could be found.

Banksy’s parody theme park opened on Saturday and offers a dark twist on Disneyland, complete with a Disney-style castle, a Jimmy Savile-inspired ‘Punch and Judy’ show and “entry level anarchism.”

Alzaqzouq said he was upset he hadn’t been informed three Israeli artists would also be displaying their work.

“I found out when [I] arrived at the show that three Israeli artists were taking part, one of whom served in the IDF. I got upset that I hadn’t been informed and tried to complain to the organizers. I was told someone would meet with me, but after over an hour of waiting no one came to meet with me,” he told al-Araby al-Jadeed.

“I decided I had to protest in some way so I went and got a bed sheet from my hotel room and wrote ‘R.I.P Gaza: Boycott Israel’ on it in coal and hung it over my artwork and laid down like a corpse in front of my two paintings on display.”

Security guards approached Alzaqzouq half an hour later to question him regarding his exhibition. The artist then spoke with Banksy’s manager Holly Cushing, who allegedly told him the protest was too “ugly” for the show.

Alzaqzouq claims Cushing told him to leave the theme park after talking with Banksy.

“I didn’t pull out of the show. I just wanted to send the message that I was protesting – but they didn’t like it and gave me the boot,” the artist said.