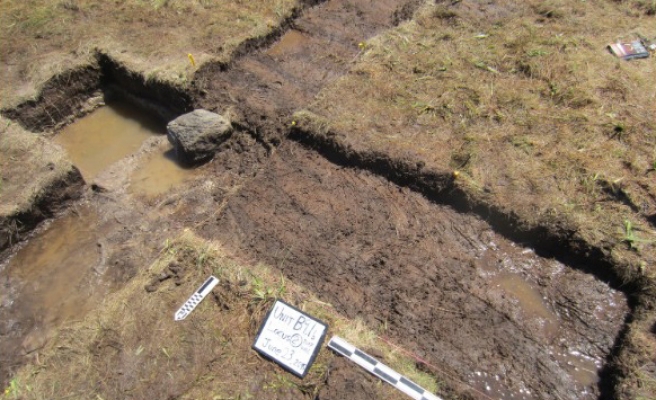 Archeologists using satellite imagery said Friday they have discovered what is believed to be a second Viking settlement in North America on the southwest tip of Canada's Newfoundland province.

Experts tracked down the site on the island's Point Rosee peninsula and began excavating it last June.

A documentary about their findings is to be aired next week on Britain's BBC and the United States' PBS public broadcasters.

In a statement archeologists involved in the project said the search was inspired by Norse oral histories that described lost Viking settlements.

That was eventually narrowed down to one promising location in Newfoundland where imagery showed an outline of remnants of turf walls and other structures buried in the soil, based on vegetation growth.

The subsequent dig unearthed a stone hearth used for iron work, as well as traces of charcoal, slag and roasted bog iron.

Vikings used bog iron to make nails that held their wooden ships together.

A lack of any artifacts at the site is also telling because Viking tools were mostly made of wood and iron. Over the centuries wood would have decayed and iron likely would have been melted down to make something else.

"Typically in archaeology, you only ever get to write a footnote in the history books, but what we seem to have at Point Rosee may be the beginning of an entirely new chapter," Parcak says in the documentary.

To date, the only confirmed Viking site in the Americas is a thousand-year-old temporary settlement at L'Anse aux Meadows, about 700 kilometers (430 miles) away on the northern tip of Newfoundland.

The settlement, which had been abandoned after just a few years, was discovered in 1960.

Since then, archeologists have been searching for evidence of other Viking expeditions.

Current thinking suggests a brief but failed colonization attempt by the Vikings.

If confirmed, the new site could point to an earlier, longer and deeper foray into the New World by Europeans -- at least 500 years before the arrival of Christopher Columbus.

The excavation is scheduled to resume this summer.