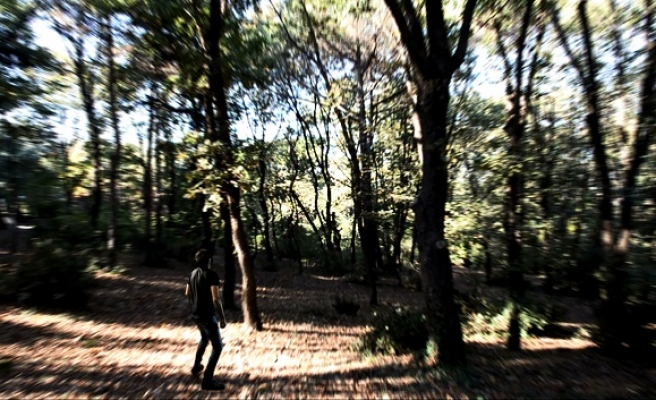 Having moved to its new project space in October, artnivo.com presents the show “Strange Days” which features the works of Çağrı Saray, Mehmet Öğüt and Volkan Kızıltunç. Taking its name from the present odd and unfamiliar days in which we seek the essence and the arche while living in synthetic spaces, where our desire to return to nature increases and the number of spaces in which we can breathe decreases, the show comprises the pieces of an idea that represents the desire of every individual living and working in a city.

The data collected from various parks in Istanbul by Çağrı Saray points out the value of the parks that are taken away from us and the value of our remaining living spaces. The measurements made by Saray comprise the building elements of his video entitled “...gibi hissetmek” (“...feeling like”) in which he attempts to rupture again and again an artificial image of nature which he tries to believe is real. The artist collects data by making observations, measurements and collecting samples in various parks in Istanbul. He tries to make visible the memories and vital functions of these spaces, which are currently accessible, though the future of which is unclear. This documentation is a tribute to the parks that we've already lost and that we're going to lose.

Mehmet Öğüt's video installation “Arkhe” (“arche”) makes use of the table metaphor (which is often utilized by philosophy) as an indicator, as he digs through individual memory, turning the process into an act of archaeological discovery. Focusing on the time period between the past and the present, “Arkhe” uses as a starting point a question concerning the pursuit of essence, which was sought by natural philosophers in order to find out the meaning of the world. Thus the work turns into a personal discovery as it seeks out the most fundamental principle.

Volkan Kızıltunç's series of photographs entitled “Last Child in the Woods” takes its name from Richard Louv's book in which he talks about the “Nature Deficit Syndrome” experienced by generations who live disconnected from nature. Depicting urban people in natural environments, the photographs turn into sequences of latent narration which we're both familiar with and suspicious of. Independent of geography and borders, these odd scenes in which urban individuals turn into subjects make us question our perception of reality.

Presenting the works of Çağrı Saray, Mehmet Öğüt and Volkan Kızıltunç, the show “Strange Days” can be seen at artnivo.com project space between the dates February 12 – February 27, 2016.