Taking the world to Bangladesh with Asian photo festival 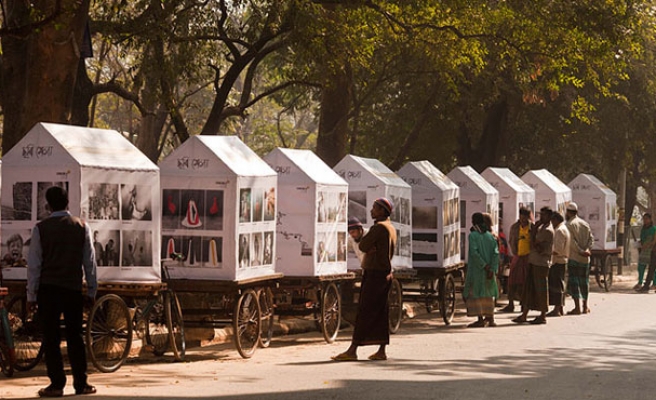 Photographers took hold of the streets to celebrate the opening of one of Asia's largest photography festivals with singing, dancing and chanting, in Bangladesh's capital, Dhaka, on Friday.

A procession from the national press club to Bangladesh's academy of arts marked the beginning of the eighth edition of the Chobi Mela biannual, which exhibits photographers from around the world, including countries like Turkey, Pakistan, Egypt, Nepal and Iran.

For two weeks, photographers from more than 20 countries will be featured, while aspiring talents will have their work reviewed by professionals and hone their skills at a series of talks and workshops.

Exposing Asian photographers and their work to the wider world is the goal of the festival, according to its founder, renowned Bangladeshi photographer Shahidul Alam.

"I could see the transformation in these two. I realized it couldn't be restricted to these two young men. It was something that needed to be made available to more," Alam said. "So, if you can't take the photographers to the festival, then you take the festival to them."

Also, Alam said the festival was also a "natural progression" from the Dhaka-based Drik photo agency and Pathshala South Asian Media Institute, which he also founded.

The idea behind both was to develop more balanced coverage of developing countries -- which he described as the "majority world" -- by developing photographers who could produce informed storytelling from the region rather than relying on western media.

"We recognized that Bangladesh had a very negative (perception), was very poorly understood and the way to address that was to make sure it was not just white, western photographers telling the story of Bangladesh," he said, adding that Chobi Mela "was a natural progression from this. The idea was to bring the world to Bangladesh."

Alam said the photographic work, in both credibility and quality, reached its goals but he was not convinced the festival had yet managed to balance perceptions of developing countries.

"In terms of whether attitudes have changed, I don't think so. It's not just a matter of informing people, it's a matter of intervening in the power structures," he said. "There's an aggressive play to undermine majority world countries."

One of the larger contingents at the two-week Chobi Mela event, which features photographers from more than 20 countries, is from nearby Nepal.

NayanTara Gurung Kakshapati is a co-founder of Nepali collective "photo.circle," whose exhibition features a photo archive of Nepali family history. She said their 26,000 images, mostly from family collections, provided a different way of looking at the country, which escaped a decade-long civil war in 2006.

"Nepal has been through many social and political transformations. But what has been documented of the past is very specific, mainly about Kings and Ranas," Kakshapati said. "We've been using the slogan of 'history begins at home.' It all feeds into a larger national narrative."

This is the first time photo.circle have exhibited at Chobi Mela. Kakshapati said working with Alam helped the group, founded in 2007, to develop a similar platform for photography and education in Nepal.

"It's an amazing platform. You really meet the world here. In the past, we've made contacts that really led to solid partnerships," she said, adding that having a photography festival in Bangladesh opened up rare opportunities.

"It's only an hour away, we don't need to go Perpignan or Poland, we just take a short flight," she said. "It opens the regional photography to the world. We get to meet people. If you crossed the ocean to go to New York, you might not be able to get an appointment with the editor of Time, but here, he comes to you."