Under Buganda's unwritten constitution, everything belongs to the king, who is locally known as "Kabaka." 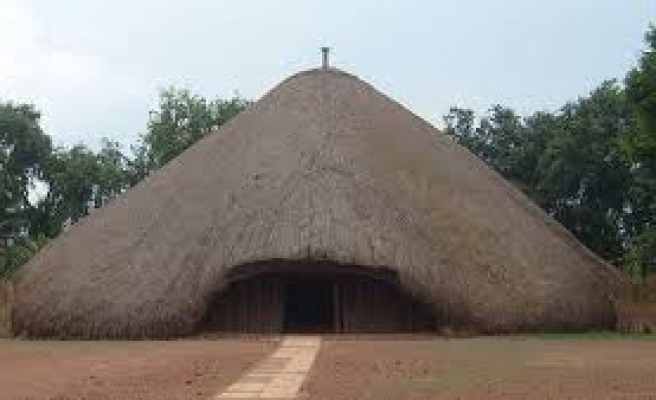 For hundreds of years, a set of unwritten laws were handed down orally – from one generation to the next – in the ancient Kingdom of Buganda in what is now southern Uganda.

"We have a constitution that is not written, but it's known by everybody. In Buganda, for any activity, there is a norm," Buganda's second deputy premier, Semambo Mahmoud, who also serves as the kingdom's culture minister, told The Anadolu Agency.

The Buganda Kingdom, from which modern Uganda derives its name, is one of East Africa's oldest traditional kingdoms, with a history stretching back more than 1,000 years.

Today, the kingdom covers all of Uganda's Central Region, including capital Kampala, with its teeming population of some six million people.

Under Buganda's unwritten constitution, everything belongs to the king, who is locally known as "Kabaka."

"In the old days, if he [the king] came to your house and said, 'I've fallen for your wife,' you would just have to say 'Thank you,' prostrate yourself, and hand over your wife – it was considered an honor," Mahmoud explained.

The kingdom, which enjoys a degree of autonomy from the Ugandan state, is organized according to the clan system, with the local administration being divided into counties that are headed by county chiefs who report to the Katikiro (the prime minister) and then to the Kabaka (the king).

Under Buganda law, royalty is passed through the father's side; the king is entitled to the throne by birth – not through elections.

However, Mahmoud explains, the Kabaka and his royal family are not supposed to intermarry among themselves, but rather from "among the commoners."

Nor is the king supposed to marry from his mother's clan, so that every clan has an equal chance of producing a Kabaka.

Buganda has 50 clans, with members able to trace their lineage back to a common ancestor – a central feature of the kingdom's culture. Names are given depending on one's clan.

"We name our people with a specific set of names. For example, names associated with the Elephant Clan are different from those of the Cow or Mushroom clans," Mahmoud said.

He explained that it was taboo for a Muganda (a Buganda person) to eat the item for which his or her clan is named – be it a kind of meat, a vegetable, a fish or a fruit.

Clan heads used to be identified from birth. Repeated clan clashes, however, led to a rotational system for choosing clan chiefs.

Each clan has a specific traditional duty to perform for the king. For example, if the king wants to be carried, he is lifted by the Buffalo Clan, while his driver hails from the same clan.

Those from the Mushroom Clan, meanwhile, are supposed to clear the ground before the Kabaka.

The monarch's drinking gourd is tended to by the Elephant Clan – a responsibility taken over from the Lung Fish Clan, according to Mahmoud.

Mahmoud told the story of the Lung Fish official responsible for guarding the king's gourd, who gave it to an Elephant Clan official to watch. Upon returning, he asked the Elephant official to give him back the gourd.

But the Elephant official declined, saying: "No, your hands are stained with blood; I cannot let you touch the king's gourd," Mahmoud recounted.

The matter was taken up with the king, who decreed that the Elephant Clan should henceforth be responsible for guarding the royal gourd.

The king's traditional guards, known as the "Bambowa," Mahmoud explained, are drawn from among all the clans, that they all might have a share in the honor of securing the king.

The firstborn in a Buganda family is known as "Baaba" and is given authority over his siblings. Yet, Mahmoud explains, these are not allowed to inherit anything from their fathers, as their authoritative position in the family is considered enough.

Inheritance, said Mahmoud, typically goes to another child in the family.

"A man would marry as many women as he wished and children could be breastfed by any of the wives; children are obliged to show respect for all stepmothers," he said.

The Baganda (the Buganda people) also have a practice known as "bulungu bwansi," which means "the good of the community," according to which each member of the community must ensure that his respective area is kept clean. This includes cleaning roads, homesteads and wellsprings.

This came at the order of an old king, says Mahmoud.

One of the kabakas, the story goes, stepped on a pile of feces and said, "From now on, I don't want to see people defecating anywhere – you must dig latrines."

The saying has since become a patriotic a duty among the Buganda people.

"Our king and kingdom are cherished by our people. This is demonstrated whenever the king moves – the people prostrate themselves, clear the way [before him] and lay clothing for him to walk on. Baganda love their king," Mahmoud asserted.

After a Muganda dies, they are buried along with their treasures, the culture minister explained.

"We don't believe people just die," he said. "Rather, they go to sleep, which is locally articulated as 'agalamidde'."

When Mugandas visit the graves of their ancestors, they are required to introduce themselves and proudly spell out the names of their deceased forebears.

Before the arrival of Christianity and Islam, the Baganda had their own gods and spirits, which are still important in Buganda culture today.

"These spirits are part of our faith," Mahmoud said.

Spirits include Muwanga, the most powerful; Musisi, for earthquakes; Mukasa, for good health, wealth and fertility; Walumbe, for sickness and death; Kiwanuka, for fertility and thunder; Ddungu, for games and hunting; and Nagawonye, for rains and crops.

"Some of these spirits are believed to be human beings who died – but their powers remained," said Mahmoud.

One such spirit is Kibuuka, guardian of war, named after a great fighter killed in battle. It is said that Kibuuka was able to fly like a bird over the battlefield.

The Baganda were angered when his shrine was desecrated by British colonists and its contents – including the legendary hero's jawbone – put on display in a Cambridge museum.

On the other hand, the Lubaale spirits – inspired by men who had shown exceptional skill when alive – are expected to intercede favorably in national affairs when asked.

The Lubaale, also known as "the Guardians," are not to be ignored or disrespected – even by the king.

Before all major national events, such as coronations or wars, oracles at the temples of the various gods were consulted and offerings made. For a king to ignore an oracle's pronouncement – or desecrate a temple – was to invite certain disaster.

The king is also expected to make an annual offering of cows and respectfully ask the oracles for prosperity and good harvests.

For any Muganda, when there is no "matooke" (banana), the meal is considered incomplete, says Mahmoud.

To prepare matooke for lunch, it is peeled, placed amid banana leaves in a large saucepan early in the morning and set on a fire or charcoal stove.

"The aroma is what pulls you to the meal; it's very delicious and served with a sauce of your preference," said Mahmoud.

The banana is also used to brew local beer known as "Mwenge Bigere," which gets its name from the method by which it is prepared – namely, the maker's feet.

The technique is simple, says Mahmoud.

"You dig a hole, get the stems of a banana plant and lay them down," he explained. "Then you place the bananas on top and step on them. It is collected with a gourd and put in a big pot. Sorghum is then added to make beer."

Traditionally, every Buganda household must maintain a few banana trees for the king, known as "Olusuku lwa Kabaka."

"But the king doesn't come for them," said Mahmoud. "You just had to look after them [the banana trees] as if they were his. It was a way to encourage people to keep up farming."

For centuries, people of the Buganda Kingdom had dressed in bark cloth. Locally known as "Olubugo," the bark is collected from the Mutuba tree (Ficus natalensis).

Tom Kyembe Mukasa, an official at Buganda's Tourism Ministry, said the special bark had been discovered by their ancestors.

"Preparation involves it being cut from the tree. It is then beaten until it stretches, then it is cooked to make it softer, especially if it is for the king," he explained.

Today, the bark cloth is used on different occasions, including burials, marriages and other family activities.

Mahmoud said the king would wear Olubugo for ceremonial functions, such as his coronation. But the king's bark cloth was fashioned from the Mituuba (fig) tree.

"The one worn by the Kabaka is from a special fig tree known for its flowing branches," he noted.

"They have to make it very soft for the king and it's usually light brown in color," he added. "Commoners, meanwhile, locally known as 'Bakopi,' use the darker cloth, which is a bit rougher."