'The Female Wolf' performed on stage-VIDEO

The focus of the play, adapted to current post-Societ times, is the relations of the novel’s hero, Bazarbay, in the context of Aitmatov’s famous question “In what conditions are human beings able to maintain to be humans?” 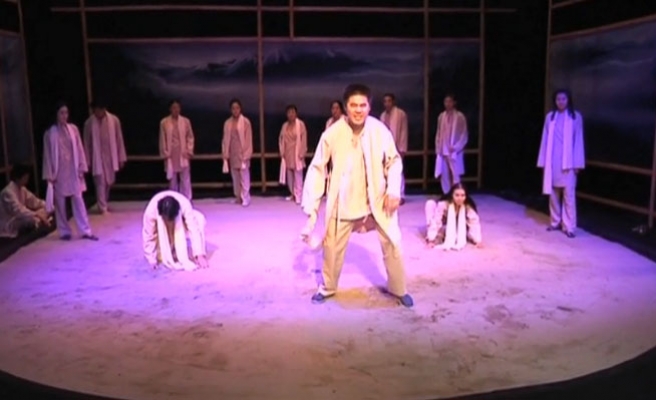 One of the novels of well-known Kyrgyz writer Chingiz Aitmatov, “The Female Wolf Dreams,” was performed as a theatre play during the 30th anniversary of the novel in his homeland’s capital by a theater company called Uçur. The novel was adopted by famous Tajik director Barzu Abdurrazzakov. The play, invited by many international festivals, is Aitmatov’s fourth novel brought to the stage. The Uçur theatre company performed two of Aimatov’s novels, “Caabars” and “Anarhay,” in the recent years.

Commenting on the play, Abdurrazzakov said “As a person who is interested in literature this is not the first time I am dealing with Aitmatov. His wind heaved up my anchors in my childhood and when I was a teenager. It was him who pushed me to the pool of art. From my early years, I get on this art ship by reading his pieces. If I had not read his novel “White Ship,” I would have been a completely different person. I told him this as well. I have been living with him for a quite long time. But in practice, It is my first time I engage with his works.”

The focus of the play is the relations of the novel’s hero, Bazarbay, in the context of Aitmatov’s famous question “In what conditions are human beings able to maintain to be humans?” Coldoshbeg Canjigit who portrays Bazarbay in the play said, “The plays of Aitmatov should be performed with the same qualifications of Shakespeare’s novels. I worked so hard for a month and I examined him just like a judge and attorney for the role. We attempted to present Bazarbay, not within the Soviet context, but tried to adapt the character to the present time. To tell the truth, not only in Kyrgyzstan, one of every two men in the world is Bazarbay. This is my fourth time to take a part in Aitmatov’s plays. Each of them are great and push one to consider it.”

The 30 year-old play with a clear reference to today’s world will be performed in many Kyrgyz cities, as well as the Republic theater festival. After September it will start to travel to international theater festivals in different parts of the world.