The story behind the keys of the Ka'bah

The key of the Ka'bah was given to one of the most prominent families of Mecca, Bani Shayba, and they have been guarding the keys of holy mosque for more than 1400 years. 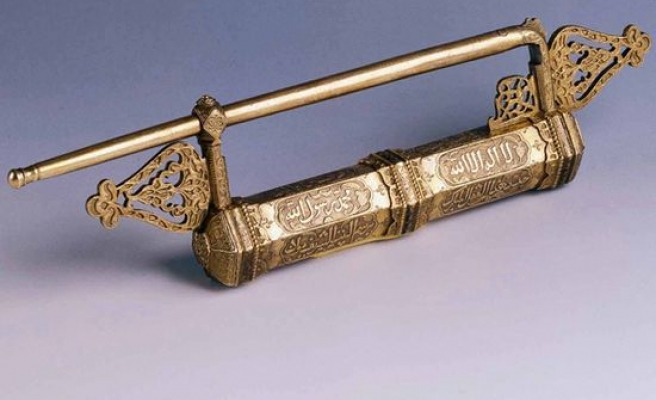 The Ministry of Sacred Places in Saudi Arabia announced that the key of the Ka'bah, the most sacred site in Islam, has been replaced with the new one due to the old key’s high level of oxidization.

The new key was given to one of the most prominent families of Mecca, Bani Shayba, who has been keeping the keys of holy mosque for more than 1,400 years since the early Muslims conquered Mecca.

When the Ka'bah was reconstructed by the Prophet Abraham and his son Prophet Ishmael as the first sanctuary built on earth for the worship of God alone, it was opened for the Hajj pilgrimage. As people have been coming to visit the Ka'bah to perform religious rituals since then, the city of Mecca became accustomed to fulfilling the organizational needs of pilgrims during the Hajj season. Although over time the people strayed from the Prophet Abraham's teachings of monotheism and had fallen into pagan idol-worship, the Ka'bah continued to be a place of pilgrimage for worshippers.

The administration of the holy site was handed over to the Jurhum tribe after the Prophet Ishmael's time. However, this tribe was forced to leave Mecca following the victory of the Khuza'a tribe that had invaded from southern Arabia. The leader of the Khuza'a tribe prepared the ground for paganism to spread in the region, allowing many idols to be kept in the Ka'bah.

In the mid 5th century, the authority of Mecca was later taken over by the Quraish tribe from which Prophet Muhammed hailed. After seizing control of the city, Qusayy bin Kilab, the leader of the Quraish, tribe took responsibility for the Ka'bah, which included the preserving holy site’s keys. Just before his death, he delegated his duties to his two sons, Abduddar and Abdulmanaf. The administration of the Ka'bah along with its maintenance and preservation was given to Abduddar. After the conquest of Mecca by the early Muslims led by the Prophet Muhammed, the services continued to be undertaken by the Prophet himself. Although the duty of serving the Ka'bah was demanded by the Prophet’s uncle and his closest aide Ali, who was also his son in law, the Prophet sought stability and decided that 'Uthman bin Talha, someone from the line of Abduddar and his uncle’s son Shayba bin 'Uthman should have the keys. Since then, the Shayba family has had the honor of possessing the Ka'bah’s keys. Over the course of centruies, Mecca has been under various authorities ranging from the Ottomans to the Britons, but the key has always been protected by the Shayba family.

Another historically important part of the holy place is its gates. When the Prophet Abrahma built the Ka'bah, he deliberately did not add a gate to the site. According to some sources, the first gates were built by the Quraish in 606 CE. The gate was restored after it was heavily damaged during the Umayyad dynasty’s siege of Mecca. After the siege, Abdullah bin Zubeyr restored the Ka'bah and built another gate which was later on covered by a wall by al-Hajjaj bin Yusuf Al-Thaqafi with the approval of the caliph.

The gates have been restored by every prominent dynasty and Muslim Empire since any contribution to the Ka'bah has been considered to be a prestigious act both in the eyes of the public and in Islamic tradition.

When the Ottoman sultan Yavuz Selim added Egypt to the Empire’s land, that move strengthened the Ottoman’s legitimacy in leading the Muslimw world and thus, as a demonstration of accepting Ottoman authority, the ruler of Mecca and Medina sent the Ka'bah's keys to the Ottoman sultan. Ottoman sultans described themselves as the servants of the Ka'bah and took care to provide the Ka'bah’s needs. As a show of their respect to the holy site, Ottoman sultans kept the older unused keys of Ka'bah after they were replaced by newer ones. Today, they are on display in the museum of Topkapi Palace in Istanbul.