Fair to host around 50 writers and publishing houses from 25 countries including Syria, Saudi Arabia, Lebanon and Kuwait 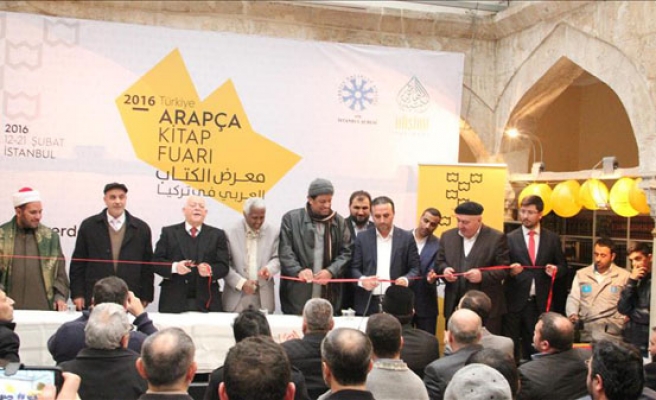 The Writers' Union of Turkey and the Hasimi Publishing House organized the event which will run until Feb. 21.

Speaking at the opening ceremony, Mahmut Biyikli, president of Istanbul office of the Writers’ Union, said that the cultural needs of Arabic-speaking people living in Turkey needed to be provided for beside housing needs as Turkey hosts millions of refugees.

Turkey hosts 2.7 million Syrian and 170,000 Iraqi refugees. So far, Turkey has spent $9 billion on the refugees, while the UNHCR has only granted $455 million.

About the aim of the fair, Biyikli said that exhibitions were important for cultural cooperation between the Arab and Turkish worlds.

"This fair will lead Turkish writers to be known in the Arab world," he added.

Biyikli also stated that "Arabic is not just the language of Arabs, it is an art language as well."

Ali Sozer, the chief of Hasimi Publishing House told Anadolu Agency that the center of Arabic-language publishing was Beirut but after the Arab Spring this role had decreased.

"Arab publishers started to become interested in Istanbul because they are not sure about the future of Beirut," he said.

The fair will host about 50 writers and publishing houses from 25 countries including Syria, Saudi Arabia, Lebanon, Jordan, Morocco and Kuwait.

The book fair is expected to welcome over 10,000 people interested in Arabic literature.