Iznik tiles were probably taken to France in late 1800s by a French restoration expert who fixed these ceramic art in Istanbul. 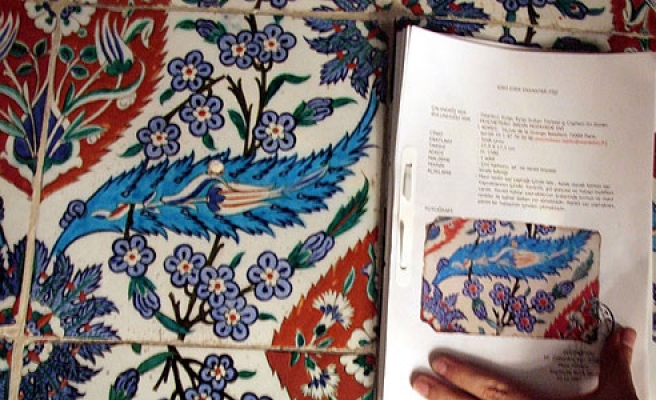 Turkey has repeated its request for return of historical Iznik ceramic art from France as part of its campaign launched in recent years to press harder to bring back historical artifacts taken abroad.

Turkish Culture & Tourism Ministry and Foreign Ministry officials are waiting for a quick response from France for return of Iznik tiles that are on display at French museums.

The tiles, finest surviving examples of Iznik ceramic art, once decorated the walls of the tomb of Ottoman Sultans Selim II and Murad III and the library of another Sultan Mahmud I in Istanbul.

Iznik tiles were probably taken to France in late 1800s by a French restoration expert who fixed these ceramic art in Istanbul.

"Every artifact belongs to its own country and must be returned," said Culture Ministry official Murat Suslu.

Turkey repeatedly demanded return of these historical artifacts from French government, however, could not see any results.

"Most recently, our Prime Minister Recep Tayyip Erdogan informed French President Nicolas Sarkozy about the situation during his recent visit to Turkey earlier this year. We have made our requests a few times more after this meeting but we have not got a response yet," Suslu said.

"In the past, Ottoman Sultans might have presented some historical artifacts from ancient cities to foreign statesmen as gifts; but none of them could have given away tiles of their ancestors' tombs as gifts," he added.

Archives confirm Suslu's arguments as there were no permissions found for taking these tiles out of the country.

"We expect a quick response from French authorities," Suslu said.

Turkey's campaign yielded significant results recently, as Germany agreed last May to return a Hittite sphinx which was displayed at a museum in Berlin. Only this year, a total of 1883 pieces of historical artifacts were brought back to Turkey.