More than 50,000 people visited the Ishak Pasha Palace in the eastern province of Agri in the first half of 2010, local culture and tourism office said. 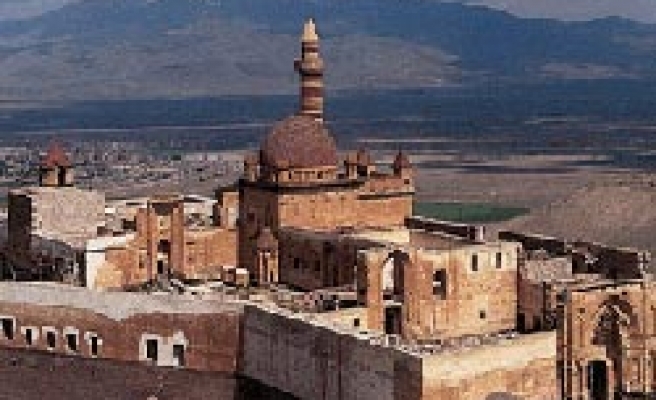 More than 50,000 people visited the Ishak Pasha Palace in the eastern province of Agri in the first half of 2010, local culture and tourism office said on Wednesday.

Muhsin Bulut, the local culture and tourism director in Agri, said Ishak Pasha Palace in Dogubayazit town received 50,422 visitors in the first six months of 2010.
"We expect some 150,000 visitors till the end of the year," Bulut told AA correspondent.

An Ottoman-period palace, the construction of which was launched in 1685 by Colak Abdi Pasha, the bey of Beyazit province; Ishak Pasha Palace is more of a complex than a palace. It is the second administrative campus after the Topkapi Palace in Istanbul.

The palace is built on a hill at the side of a mountain 5 km (3 miles) east of Dogubayazit. It was the last large monumental structure in the Ottoman Empire from the "Lale Devri" period. It is one of the most distinguished and magnificent examples of the 18th century Ottoman architecture and is very valuable in terms of art history.

According to the top of the door inscription at the Harem Section, it was constructed in 1784.

Its construction was completed in 1784 by Colak Abdi Pasha's son Cildir's Governor Ishak Pasha and his grandson Mehmet Pasha.

Turkey restored some parts of the Ishak Pasha Palace between 2007 and 2009 and spent over 5 million Turkish liras (3.2 million USD) for the restoration.

Efforts are under way to launch a second restoration in the palace.