Safranbolu in a northern city of Turkey, Samsun has houses, and house-hotels that they vary considerably in the degree to which they trade on Ottoman authenticity. 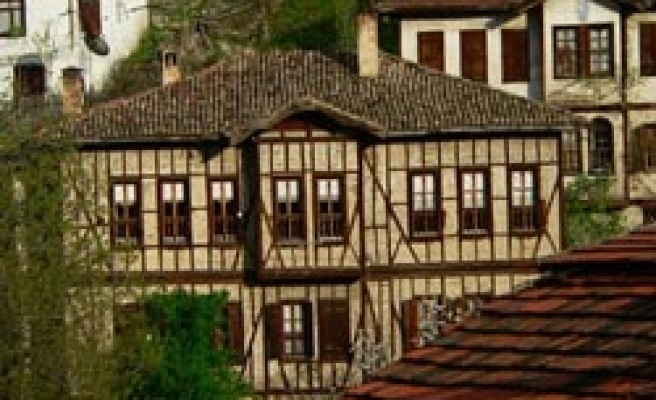 The best way to get a feel for what one of Safranbolu's magnificent houses might have been like in the days when they were family homes is, of course, to book into one of the house-hotels. Nowadays there's a wide range to choose from and they vary considerably in the degree to which they trade on Ottoman authenticity.

Right at the heart of Safranbolu is a neat little triangle of cobbled streets lined on both sides with wooden booths that probably resemble the dolaps (cupboards) that once filled İstanbul's Kapalı Çarşı (Grand Bazaar), Cihan News Agency said. This is the Yemeniciler Arastası, the picturesque bazaar where the makers of soft leather shoes (yemenis) once sold their produce although today you'll probably have more luck finding a tablecloth or souvenir T-shirt. The arasta is a lovely, shady spot with a cute little cafe where life continues at a slow pace despite the commerce going on around it. Come here early in the morning and you can watch the shopkeepers setting up for business before the crowds get too obtrusive.

Safranbolu is one of Turkey's true treasures, a town full of beautiful Ottoman houses dating back to the 18th and 19th centuries that somehow managed to survive the shipwreck days in which everything old was torn down to make it into the haven of the boutique hotel era. The biggest risk now is that it turns into a glorified Ottoman theme park with nothing but the hotels to show for its beauty, but that day is still some way into the future, and in the meantime you'll soon hear the clash of hammer on metal that will lead you to the area around the Akçasu Canyon where you can still watch craftsmen turning out not just a range of fancy metalwork but some mighty fine saddles, too.

There is a problem, you see, in making the transition from extended family home to all-mod-cons hotel, and that is that creating a typical hotel bedroom flies in the face of the way in which domestic space used to be used in the past.

To get an idea of what the houses were like before their conversion you should head straight for the Kaymakamlar Müze Evi (Museum House), the most interesting of the houses open to the public if only because it has been kitted out with mannequins which, while sometimes rather comical, do at least help you imagine the lost lifestyle.

In Ottoman times the ground floor of most of the houses was used for storage and stabling animals. Upstairs a series of rooms opening off central “halls” served a multiplicity of purposes. Each would have had a sedir (divan) running round the walls on which people could recline during the day, then sleep at night. A niche in the wall was used to store bedding during the day and to house the low tables that would be brought out at mealtimes so everyone could sit down on the floor and eat together. Predictably, elaborately carved fireplaces provided a focal point for each room in winter. Less predictably, cupboards contained rudimentary bathing facilities, as modeled with particular aplomb by one of the Kaymaklar Müze Evi's mannequins.

The trouble for would-be hoteliers is that few guests want to sleep on the traditional divans although they don't always leave much space in the room for conventional beds. Given that Safranbolu is a popular weekend destination for families with children, the problem is compounded by the need to shoehorn in extra beds. Add in trendy crown canopies and it can become very hard to appreciate the original aesthetics of the room. Then there's the problem of the cupboard-bathrooms. A few hotels do their best to insert modern facilities into them, but that can mean guests having to negotiate awkwardly lofty doorsteps. The end results are almost always pretty poky and not at all comfortable to use.

Still, these are problems for the purists. For most visitors the mere fact that they're staying in such an old and beautiful building will be pleasure enough without having to worry about whether a nice bathroom is an authentic restoration or not. But another converted hotel has offered a breakfast room of unsurpassed beauty on account of the glorious pool (havuz) in the middle of it but not for swimming. Instead, the sound of water trickling into it provided a soothing, cooling backdrop for whiling away sultry afternoons.

On the other hand, another hotel has opted for setting relatively low beds at an angle to the divan so that they obtrude as little as possible.

Most of the hotels are in the busy Carsi (Market) area of Safranbolu, but it's also possible to do what the Safranbolulus did and head for the Baglar area where yet more old wooden houses are now hotels.

The snag with staying in Baglar (which might be a plus for some people) is that it cuts you off from the hustle and bustle of Carsi, which is where Safranbolu's other main attractions are centered. These include a huge caravanserai, several Ottoman mosques, a fine hamam and the excellent Kent Tarihi Müzesi (City History Museum) housed in what was once the Hükümet Konağı (Government Mansion); don't miss the reconstructed shops in the basement. Right next to the museum you can climb the clock tower for magnificent views over the pan-tiled roofs and to inspect the mechanism of a clock made in England some 200 years ago. Then you can wander into what was until recently the Cezaevi (Prison) next door for a very pleasant meal in unexpected surroundings.

Most people only linger in Safranbolu for a day, but it can make a good base for excursions to several other local attractions, too. If Ottoman houses are your thing, you can take a taxi out to Yorukkoy (Nomad Village) which is, if anything, even more spectacular than Safranbolu. Alternatively, you can take a trip out to the late 18th-century İncekaya Aqueduct set in pretty countryside, or to the show caves at Bulak, billed as the fourth largest cave network in Turkey and full of impressive stalactites.