The Istanbul Naval Museum houses more than 20 thousand pieces Ottoman and Turkish naval historical artifacts. The museum has three floors of exhibition space and an annex in the rear that houses a boat collection backdropped with Bosphorus views. 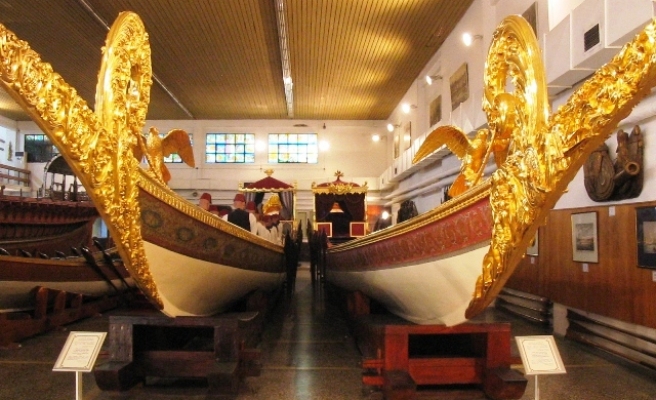 World Bulletin / News Desk
It is well documented that Turks came to Anatolia from Central Asia on horseback at the beginning of the 11th century, and they were introduced to seafaring for the very first time as they settled in Asia Minor in the 14th century.
At the Istanbul Naval museum, visitors can step into Turkey's nautical history and see first hand the maritime capabilities of both the Ottomans and the Turks.  Even though sailing was not in the forte of the settlers of Asia Minor, they understood the importance of mastering the seas as the country was surrounded on three sides by sea. They began to develop their maritime capabilities and fleet consisting of frigates, submarines, and destroyers, etc. with great sailors such as Caka Bey, Umur Bey, Piri Reis, Barbaros Hayrettin Pasha and Turgut Reis among many others.

In Istanbul, up until the 1970s there was no bridge connecting the European and Asian sides of the city and travelling by boat was crucial for transportation of people and for trade.  Among the different variety of boats, the Sultan's ornate gilded imperial caiques (kayik boats), some over 32 meters (104 feet) long were once a striking sight up and down the Bosphorous during the Ottoman empire.They were used by the sultans and the royal family for short-distance trips.  They were built and ornamented to reflect the power of the state and the sultanate and commiserate with this status, all other water craft were required to stop as the sultan's elegant vessel swept by. Today, these caiques are on display in the Naval Museum in Besiktas.

The new Istanbul Naval Museum building which opened in October 2013, after a six year renovation, was purpose built to house the caiques. The museum situated by the ferry dock in Besiktas next to the mausoleum and monument to Ottoman Admiral Barbaros Hizir Hayrettin Pasha houses more than 20 thousand pieces of Ottoman and Turkish naval historical artifacts with three floors of exhibition space and an annex with displays the magnificent caiques with a suitable apt backdrop of the Bosphorous.

The bottom section of the museum is devoted to artifacts relating to milestones in Turkish naval history like the Conquest of Istanbul, the Preveza Naval Battle, the Galleon Mahmudiye, Canakkale naval battle, Rauf Orbay and the Hamidiye ship which was ordered from Britain to strengthen the Ottoman navy.

The oldest surviving original galley (kadirga) in the world from the 16th century is a stunning reflection of Ottoman prowess at sea. It has been fully restored and is on view at the museum. There are many other galleys boats that belonged to the navy and boats that served the purpose of transporting the women of the harem to various palaces on the Bosphorus or on the Golden Horn.

Additionally the Istanbul Naval Museum hosts Russian painter Ivan Konstantinovich Aivazovsky's work. Aivazovsky is considered one of the most prominent Russian artists and one of the greatest marine artists of the 19th century.  The Aivazovsky exhibition that was opened on January 7, showcases his oil paint works on canvas.

Since its opening, the museum has a record number of 40 thousand domestic and foreign visitors.
Last Mod: 04 Şubat 2014, 14:41
Add Comment