Turkish magazine to Charlie Hebdo: No, nothing has been forgiven!

Cafcaf magazine responds to Hebdo in the same language, saying that nothing will be forgiven by those who have been oppressed and blood still being spilt. 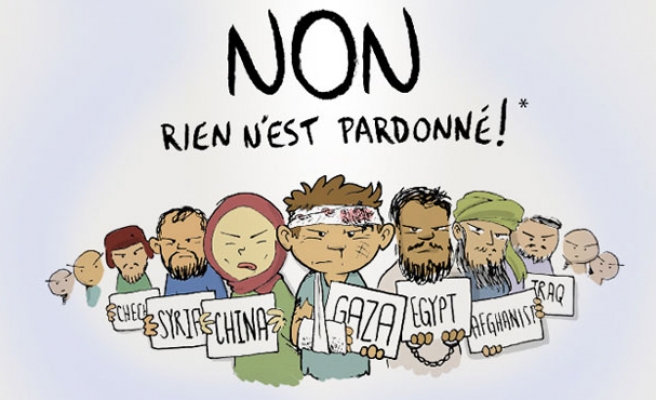 Turkish satirical magazine Cafcaf, the only publication in Turkey which places emphasis on Islamic values, has hit back to the Charlie Hebdo arrogance with a unique cover.

Cafcaf magazine has responded to Hebdo with an equally moving magazine cover in French – who have massacred human rights in the name of liberal, modern Europe - saying “Non, rien n'est pardonne” translated as “NO, nothing has been forgiven”.

"Arrogance has become a habit of the European culture, who have placed themselves above others in a position where they are free and unquestionable and in turn, have elicited a significant response from the entire world," the magazine said in a statement.

Charlie Hebdo, in their latest publication had put a caricature depicting the Prophet Mohammed shedding a tear and holding up a sign saying “Je suis Charlie”, the message of solidarity with the victims. Above the cartoon are the words, “All is forgiven”.

Cafcaf, in answer to Charlie Hebdo, showed pictures pointing to those who have been oppressed in Afghanistan, Gaza, Chechnya, Iraq, Syria, Egypt and China, with a Palestinian child in the front middle, all whose blood is still being spilt, saying nothing will be forgiven.

A weekly publication, the latest edition of Charlie Hebdo saw a reprint of 3 million magazines. Because of its its financial limitations, Cafcaf can only print once a month. It will only be able to reprint 25,000 in the upcoming issue in February.

"No, nothing has been forgiven!"

Emre Bilgic, the artist behind the cartoon, says that he felt a duty to respond in this manner. "After the terrorist attack on 'Charlie Hebdo' and as an artist who believes in Islam, I felt very much under pressure," Bilgic explained to Qantara.de.

According to the 26-year-old artist, the "Je suis Charlie" movement of caricaturists all over the world has portrayed him and his Muslim brothers and sisters as being diabolical. "Yet, no one was displaying the diabolical way in which 'Charlie Hebdo' deals with certain subjects – we Muslims, our religion, and the tragedies in our home countries," says Bilgic.

He read earlier editions of Charlie Hebdo in which caricatures were used to make fun of the hundreds of Muslims who had been murdered in Egypt as well as jokes about the rape of Bosnian women, explains the Turkish caricaturist. "With my drawing, I wanted to say that regardless of how hard you attempt to portray us as devils, we know who really has blood on their hands. We have been watching it happen for years and we have forgiven nothing," says Bilgic.

Over the course of human history, there have always been a number of Muslims who have drawn the Prophet Muhammad, says Asim Gultekin, the founder of "Cafcaf". "In Islam, however, there exist traditional manuscripts, the so-called 'Hilye-i Sadet,' which means 'the Appearance of the Messenger of Allah.'"

"These manuscripts describe Muhammad's appearance in detail – his eyes, nose, mouth and even his gait," explains Gultekin. A devout Muslim will nevertheless not portray the Prophet. "One could at least expect from Western culture that its caricaturists would first have a look at these documents. They should read how his appearance is described. It would at least be a sign of respect. It is thoroughly possible to draw a faithful image of the Prophet. Caricatures of Obama look like Obama and those of Jesus conform to his traditional image, says Gultekin. "Why isn't this the case for the Prophet Muhammad?" says the devout Muslim.