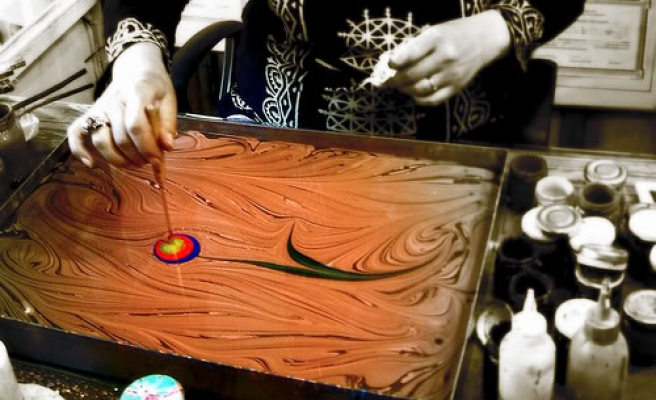 Turkish paper marbling, known as Ebru in Turkish language, has been added to United Nations' list of the world's cultural heritage.

Turkish Culture and Tourism Minister Omer Celik said Turkey applied to UNESCO for this art to be included in the cultural heritage list in March of last year.

"With the art of Ebru, the number of the elements that represent Turkey on the list has reached to 12," Celik told The Anadolu Agency.

Turkey's application file was among the first five out of 46 others.

The minister thanked those who contributed to this success.

Ebru is an art of creating colourful patterns by sprinkling and brushing colour pigments onto a pan of oily water and then transferring the patterns to paper or fabric.

Lavash, a flatbread submitted by Armenia, was also inscribed on UNESCO’s cultural heritage.

The minister said Armenia aimed to make lavash popular across the world as an Armenian cultural specialty. Lavash was eaten in countries like Azerbaijan, Uzbekistan and Afghanistan.

Celik said lavash is a shared culture in the region, and said Armenia was not the only owner of this bread.

Last year, Turkish Coffee Culture and Tradition was added to the heritage list and there are ten other cultural specialties:

--Arts of the Meddah, a Turkish story telling art

--Alevi Bektasi Ritual, a set of mystical and aesthetic body movements with musical rhythm and lyrics

--Mesir Paste Festival, a festival with various traditional practices that has been celebrated for more than 470 years