Why are there so many manuscripts in Timbuktu?

In recent years, Timbuktu's libraries and manuscripts have been mentioned so often, but how such works could be accumulated and transferred to the present day in a desert city, in the middle of Africa? Esra Çifçi wrote Timbuktu, Africa’s scholarly center. 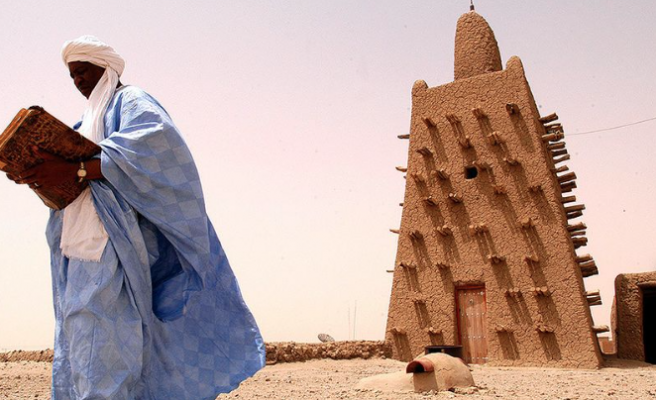 The African countries, remembered for their deserts, poverty, wars and colonization, have begun to be remembered along with Timbuktu in recent years for their cultural heritage. Timbuktu, a living example of the fact that Africa is not a pastless continent, has become the center of knowledge with the Islamization of West Africa. Moreover, it was not only the Islamic sciences, but the center where all the scholarships of the period were educated.

The sultans invited important scholars of the Islamic world to further strengthen scientific authority of Timbuktu. So how did Timbuktu become the scholarly center of Africa? In recent years, Timbuktu's libraries and manuscripts have been mentioned so often, but how such works could be accumulated and transferred to the present day in a desert city, in the middle of Africa?

It invited scholars from Granada and Egypt to his lands

Timbuktu, from 500 B.C. onwards, has been the place of trade caravans. According to the narratives, with Tuareg settlement in the region, Timbuktu became an important trade center for salt, slave, and gold. Volume of trade was further enhanced by the Islamization of the region. For Malian or African Muslims, who have also met with a great accumulation of knowledge thanks to Islam, books and knowledge became more valuable than gold. Mansa (Sultan) Moses, one of the important kings of the Timbuktu region, made special requests from merchants to bring important books to Timbuktu. Having made great preparations for the journey of pilgrimage, Mansu Musa took a lot of gold with him and distributed it to the needy in every place he goes. Thus, Timbuktu and West Africa became the places attracting the attention. It invited scholars from Granada and Egypt to his lands. Over time, Timbuktu has become a place where not only goods but also ideas and knowledge are exchanged.

Timbuktu and Mali region has become a place, in which travelers, traders, scholars could not just pass by. The madrasas were established, the foundations of the most important scholarly city of Africa were laid and this city is built entirely as a space for books, scholars, and merchants.

When Ibn Battuta set off on a journey to Timbuktu and Mali, he says that he has heard that in the time of Mansa Musa the scholars and the travelers were very much respected. He tells his impressions about the traditions of Africans especially in the Mali region, although he stayed in Timbuktu for a day or two.

Ibn Battuta, who gave information on the transportation and communication system developed for the caravans easily and safely reach their destinations considering the desert conditions, mentions that there are neighborhoods, in which white people live, since Mali welcomes Muslims from many different regions. These expressions show that the region is sophisticated both scholarly and commercially.

The increase in book trade in Timbuktu allowed translation activities to be born. Books ranging from logic to kalam, from philosophy to astronomy, from poetry and Islamic sciences, require translation activities so that more people can be engaged with these branches of science and a rapid scholarly circulation can take place. Books were first examined, then internalized, and finally translated into local languages. For Islamic sciences, Arabic is much more preferred. The translation of books into African languages led to an intellectual and cultural revolution. Especially mentality and terms in the areas of philosophy, logic and astronomy accelerated the language development of Africans, brought the language to the advanced level and enriched it.

Timbuktu as the gateway to the knowledge in Africa

Transition to the written tradition from the oral in West African countries has been the result of scholarly activities. Since Timbuktu earned reputation for buying and selling books, it led to a new business to emerge over time. Timbuktu undertakes the task of becoming the gateway to the knowledge in Africa. Books are requested from the people preparing for the pilgrimage, they are asked to access these books from the cities on the route, or the merchants are given a list of books requested to be brought from Andalusia, Maghrib, and Egypt. It is noticed later, however, that the sending of books, originally brought to Timbuktu, to the distant West African cities, and the accumulation of books in individuals, not in libraries, limits the scholarly activities of the ones who do not have an access to all books.

For this reason, the reproduction of the books became necessary and a new business area arose. Many literate people came to Timbuktu and replicas of the books in hand are sent to those who demand in the surrounding cities and regions. Over time, Timbuktu earned a proper reputation for copying books than the book trade. Even, it is said that they have the capacity to copy the books immediately that the scholars traveling through the cities want to buy. Moreover, personal libraries have become important in Timbuktu. However, African scholars have not just read the books but they have also written remarkable pieces. We can also say that one of the most important reasons behind the fact that many manuscripts have reached the present day is the personal libraries. The Malians have often kept manuscripts of their ancestors in their homes, so most of them cannot be stolen by the colonial states.

A living proof of Africa's knowledge and social memory

In Timbuktu there are various remarkable manuscripts since Timbuktu, which has the characteristic of being the “memory” of the scholarly works of Africa, is located on the trade routes and it is a city where book trade and reproduction of books have been made. Timbuktu is a living proof of Africa's knowledge and social memory. It is an important heritage in which the Greek and Islamic thought are blended with the African thought, and the scholarly understanding of that time ranging from mathematics, philosophy, and to logic are reshaped by African culture and background. Timbuktu is one of the important Islamic cities that must be kept alive because it demonstrates the cultural heritage and intellectual richness of Africans.