World's oldest library in Morocco to reopen in May

The ancient al-Qarawiyyin Library in Fez, founded in 859 by a woman, is the oldest working library in the world, holding ancient manuscripts that date as far back as 12 centuries and will reopen in May after a major renovation. 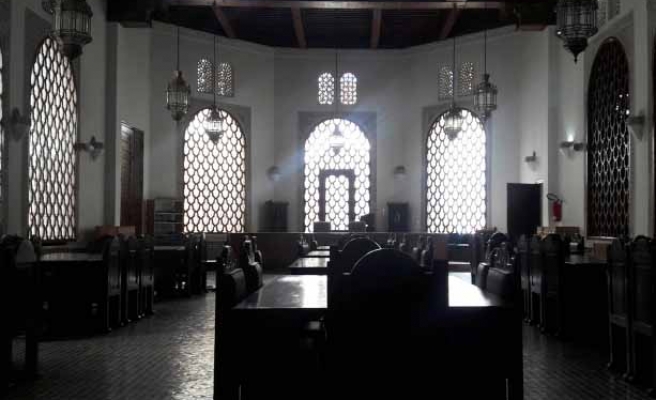 The Moroccan Ministry of Culture on receiving a multimillion dollar grant requested Canadian-Moroccoan architect Aziza Chaouni the historic al-Qarawiyyin library to safeguard its contents and make it suitable for public use, according to TED, an educational non-profit organization.

The al-Qarawiyyin complex, which includes a mosque, library, and university, was founded in 859 AD by Fatima El-Fihriya, the daughter of a rich immigrant to Fez from modern-day Tunisia. Well educated and devout, she vowed to invest her entire inheritance on a mosque and knowledge center for her new home.

Well educated and devout, she vowed to spend her entire inheritance on building a mosque and knowledge center for her community. According to UNESCO, the result is the oldest operational educational institution in the world, with a high-profile role call of alumni. Mystic poet and philosopher Ibn Al-‘Arabi studied there in the 12th century, historian and economist Ibn Khaldun attended in the 14th century, while in medieval times, Al-Qarawiyyin played a leading role in the transfer of knowledge between Muslims and Europeans.

Th deteriorating condition meant precious manuscripts were under threat from the elements. “When I first visited, I was shocked at the state of the place,” says Chaouni. “In rooms containing precious manuscripts dating back to the 7th century, the temperature and moisture were uncontrolled, and there were cracks in the ceiling.” At risk: ancient volumes covering centuries of knowledge in fields from theology to law, grammar to astronomy. Although scholars were given access to the materials, the library’s deteriorating condition meant it had long been closed to the public.

Chaouni said her team took special care to revive and imitate the building’s original features, such as the fountains and the intricate “zaleej” tilework. The rebuilt library will also use sustainable technologies – such as solar panels and rainwater collection systems – to prepare it for the future.

Throughout the years, the library underwent many renovations, but it still suffered from major structural problems, a lack of insulation, and infrastructural deficiencies like a blocked drainage system, broken tiles, cracked wood beams, exposed electric wires, and so on,” says Chaouni of the practical architectural challenges she faced.

Cleaning delicate plaster carvings without breaking them was hard, too. And the project was full of surprises: “One of the startling aspects about restoring a building this old is that you never know what’s behind a wall. You could scrap it and find a painting, take out the painting and find a door — and so on. We discovered some unexpected things, especially underground, such as a centuries-old sewage system.”

Preserving the past but with the future in mind

“I didn’t want the building to become an embalmed cadaver!” she says. “There has to be a fine balance between keeping the original spaces, addressing the needs of current users, including students, researchers and visitors, and integrating new sustainable technologies — solar panels, water collection for garden irrigation, and so on.”

Another thing that needed updating was the library’s fountains. Embedded within the dense urban fabric of the UNESCO World Heritage Medina of Fez, fountains are part of the city’s vast and ancient water network. Chaouni took particular care to restore the library’s original courtyard fountains, but in certains place where necessary, she created them from scratch, using local materials and construction systems, and introducing passive energy.

AFter three years of work, the library will open in May 2016.

The public will be able to walk through a complex that includes a reading room, book stacks, a conference room, a manuscript restoration laboratory, and a rare books collection — along with new administrative offices and a café.

Chaouni also commissioned furniture from local craftsmen who used local native wood, and built courtyard umbrellas that provide shade and mist on hot summer days. Meanwhile, the 12th-century cupola will host permanent and temporary exhibition spaces. A proud, tired Chaouni is today adding important final touches, and looking forward to welcoming the library’s first guests. “Both Moroccans and foreign visitors will get to glimpse, for the first time, some of the library’s amazing and unique manuscripts, as well as to enjoy its architecture.”