The oldest palace of the world which is in Aslantepe Tumulus dated back to 5,000 B.C. in eastern province of Malatya will become an open air museum. 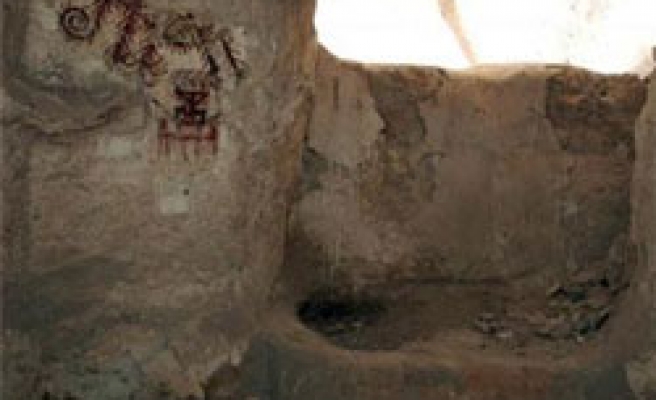 The oldest palace of the world which is in Aslantepe Tumulus dated back to 5,000 B.C. in eastern province of Malatya will become an open air museum.

Prof. Marcella Frangipane, Lecturer of Italian La Spienza University and chief of excavations in Aslantepe, told A.A correspondent that the adobe palace, dated back to the 3300 B.C., was the oldest palace of the world.

Frangipane said they aimed at showing how the state started and how the city system was to the humanity. He also said a road would be constructed to bring the tourists to the museum.

The Professor said the museum could be opened next June, noting there would be a guide to give information about the museum.

Frangipane said the palace was demolished after a fire noting they covered the ceiling of the palace with a roof. "The palace is comprised of a complex structure formed by different rooms. We constructed a roof on every building forming the palace. People looking from the roof can see old buildings. Restoration continues at points to protect the walls of the palace," he said.

"The project will be concluded this year. Only details remained. The excavation team prepared the project. We want the palace to remain as original," Frangipane said.

Frangipane said there were archeological layers at the bottom of the palace, noting that they were careful in protecting those layers.

"The roof is very heavy. There is heavy snow in Malatya in winter. As there will be the load of winter, all the legs carrying the roof are made up of iron and metal," he said.

"The civilization of those times ended with a fire. All the findings were left at the bottom of the palace. The findings unearthed in excavations are in Malatya museum.

The seals unearthed in excavations reveal that there was bureaucracy at those times and the state system started. There were many civil servants," Frangipane said.

Frangipane said the first palace was not only a temple but there were several other buildings there, "there are warehouses, a court, corridors and a temple."

Frangipane said the palace in Aslantepe Tumulus was important for the whole humanity.

The image used for this news item is from the tumulus of Antiochus I which has nothing to do with Arslantepe site and may cause confusion.