Zeugma Ancient City in Turkey to be renewed

Zeugma Ancient City, in Turkey's southeast, will be renewed with various restoration, conservation and excavation activities. 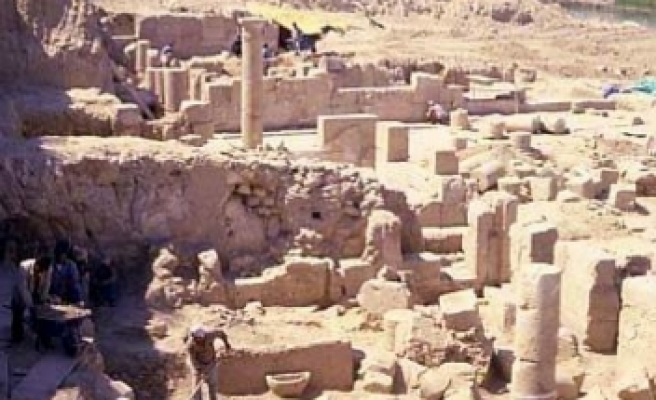 Zeugma Ancient City, in Turkey's southeast, will be renewed with various restoration, conservation and excavation activities.

Zeugma Ancient City --which takes places near Birecik Dam in Nizip town of the southeastern province of Gaziantep-- became the attraction center for world archeology circles, institutions and organizations as a part of the city was about to be buried under dam waters in 1990s.

The city will be renewed under "Zeugma Archeology Project" carried out by Turkish Culture & Tourism Ministry, and host thousands of tourists.

The renovation activities will be completed in the end of August or the beginning of September.

Zeugma is an ancient city of Commagene and a historical settlement which is considered among the four most important settlement areas under the reign of the kingdom of Commagene. It was named for the bridge of boats, or zeugma, which crossed the Firat (Euphrates) there.

Zeugma was originally founded as a Greek settlement by Seleucus I Nicator, one of the generals of Alexander the Great, in 300 BC.

In 64 BC Zeugma was conquered and ruled by the Roman Empire. During Roman rule, the city became one of the attractions in the region, due to its commercial potential originating from its geo-strategic location because the city was on the Silk Road connecting Antioch to China with a quay or pontoon bridge across the river Euphrates which was the border with the Persian Empire until the late 2nd century.

When mosaic fragments were discovered during construction of the Birecik Dam wall which commenced in 1996, Gaziantep Museum had the work halted while excavations were carried out that revealed a Roman bath and gymnasium, and 36 mosaic panels which were added to the museum collection.

In 1997, on the clay quarry area in front of the dam wall a large Bronze Age cemetery was discovered and excavated. Nearly eight thousand pottery vessels were found in 320 graves going back to the early Bronze Age. The museum staff worked unceasingly through the winter of 1998-1999, uncovering such important finds as the Akratos and Gypsy Girl Mosaic and 65,000 bulla (seal imprints in clay) in an archive room at Iskeleustu, making Gaziantep Museum possessor of the largest bulla collection in the world.

In 1999, in a building in the lower quarter of the city, mosaics depicting the head of Dionysus and Oceanus and Tethys with sea creatures were discovered.

From 1996 onwards, with the threat of being submerged under the waters of the new dam, salvage excavations were carried out by Nantes University in France together with archaeologists from Gaziantep and Sanliurfa museums.