A problem with club Med

America in the middle between Israel, Turkey, Egypt and Palestine 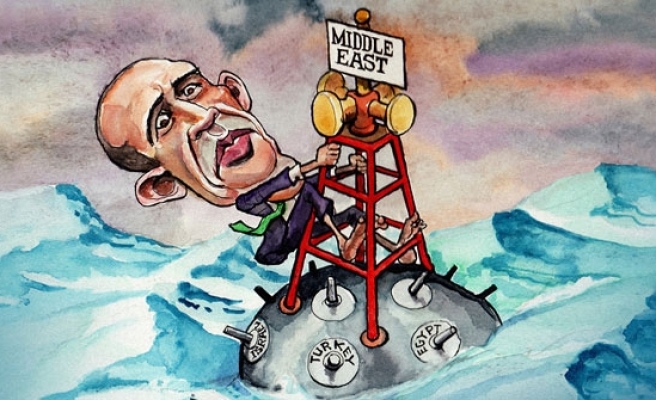 WHEN is anything going to go right for Barack Obama in the Middle East? The president came to office hoping to deliver a two-state solution in Palestine, and wasted a lot of political capital failing to do so. He wanted dearly to put America on the right side of the Arab spring, though this entailed joining a war in one Arab country (Libya) while looking on helplessly while another (Syria) slaughtered its own citizens. Now he has been drawn into a tangle of quarrels between America’s best friends in the eastern Mediterranean, from which there may be no exit.

Only yesterday, or so it seems, the eastern Mediterranean was a tranquil lake, policed congenially by the American sixth fleet. Israel, Egypt and Turkey were all friends not only of the United States but also of one another. Over the years, it is true, the peace between Israel and Egypt grew cold. After the 2008 Gaza war between Israel and Hamas a frost settled on relations between Israel and Turkey as well. Behind the scenes, however, the governments (and armed forces) of the three countries seemed happy to stick to their strategic understandings, leading policymakers in America to hope that this might be at least one virtuous triangle in the otherwise vicious geometry of the Middle East.

No longer. On September 10th Mr Obama and his defence secretary, Leon Panetta, found themselves in frantic phone calls with Israel’s prime minister, Binyamin Netanyahu, and Field-Marshal Muhammad Hussein Tantawi, the chairman of Egypt’s governing council, striving to save Israel’s staff in Cairo from a mob that had invaded its embassy. Egyptian soldiers rescued the trapped Israelis. But the spectacle of Israel’s ambassador being plucked from the jaws of the Arab spring to the safety of Jerusalem was a signal of what the Arab democratic awakening might mean for the peace treaty between Israel and Egypt, Jimmy Carter’s proudest achievement and the foundation on which America’s Arab-Israeli diplomacy has stood for more than 30 years.

At the same time, America has been struggling without success to repair the breach between Israel and Turkey that followed Israel’s killing of eight Turks and a Turkish-American on board the Mavi Marmara when it tried to break the Israeli naval blockade of the Gaza Strip in May last year. An elaborate plan to patch up the quarrel collapsed when Mr Netanyahu’s prideful coalition partners refused to let him go beyond expressing regret and offer a formal apology. Turkey’s own response has now gone into rhetorical overdrive: on top of booting out Israel’s ambassador, suspending defence ties and threatening legal action, Recep Tayyip Erdogan, the prime minister, appeared at one point to hint that Turkish warships might escort future aid convoys to Gaza.

As in the case of the growing tensions between Israel and Egypt, the rupture between Israel and Turkey leaves America helplessly in the middle. Turkey is a NATO partner; Israel is America’s special friend. The State Department says forlornly that it would like to see “these two strong allies of the United States” work together in search of regional stability. That will not happen any time soon. A UN report finding Israel’s naval blockade legal, even if its use of force was “excessive”, makes it even harder for Mr Netanyahu to give Mr Erdogan his apology. Mr Erdogan, likening Israel to a “spoiled child”, has meanwhile gone on the warpath. He was in Cairo this week, at the beginning of a tour of the Arab world, winning the admiration of rapturous Egyptian crowds for his belligerent blasts against Israel.

Not content with standing on Turkey’s own national honour, Mr Erdogan is also intent on making Turkey a champion of the Palestinians. Having felt personally slighted when Israel launched its Gaza war just when he was trying to mediate between Israel and Syria, he has now thrown Turkey’s support behind the Palestinians’ plan to give up on the interminable “peace process” and take their quest for statehood directly to the United Nations later this month. “Let’s raise the flag of Palestine to the sky and let it be a symbol of justice and peace in the Middle East,” he told a meeting of Arab League foreign ministers in Cairo.

The Americans, who are the chief sponsor of the interminable peace process, are appalled by this idea. However strong an advocate he may be of a Palestinian state, Mr Obama says that trying to create one via a UN resolution, without a negotiated agreement, will be a “distraction”. It could be much worse than that. Israel and its friends in Congress are considering dire retaliation, including cutting off financial aid and tax transfers to the Palestinian Authority. Security co-operation between Israel and the Palestinians in the West Bank might collapse, sparking a new intifada. So unless the Palestinians thoroughly dilute their planned resolution, Mr Obama will almost certainly veto it if it reaches the Security Council. That would give his pro-Israel credentials a needed pre-election boost, but might shatter all his strenuous efforts to improve America’s standing with the Arabs.

Paying the Israel premiumAmerican officials sped to the region this week, hoping, with European help, to avert a collision at the UN. But even if they succeed, America’s Middle East diplomacy will be a mess. Though Egypt’s present rulers might not welcome a rupture with Israel, the forces unleashed by its revolution will continue to push for one. Mr Erdogan’s Israel-bashing will continue as well, because it is driven not just by a grievance but also by a strategic decision to put Turkey on the right side of the Arab spring after Mr Erdogan spent too long ignoring the massacres in neighbouring Syria. That may seem hard on Israel, but the Jewish state is paying what some call a “Netanyahu premium” for its prime minister’s intransigence towards the Palestinians. And America, whose president also wanted so much to get on the right side of the Arab spring, will pay a growing premium for its friendship with Israel.