Erdogan stokes the flames in Egypt 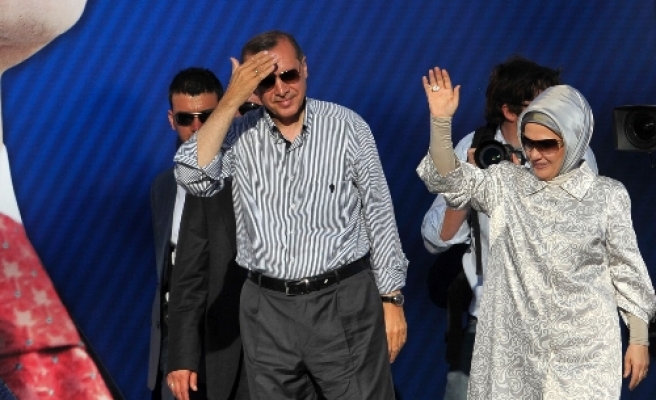 While it seems clear that Egypt is sliding towards anarchy, many questions remain about who is responsible for the drama at the Israeli Embassy in Cairo last Friday, an incident that very nearly turned into the lynching of six Israeli security guards and a diplomatic scandal on par with the hostage crisis at the United States Embassy in Iran in 1979.

To add to the suspense, the visit of Turkish Prime Minister Recep Tayyip Erdogan to Egypt, which began on Monday, is stirring a lot of speculation. Israel's main Muslim partners, now estranged, are ostensibly conspiring on their own. Yet this superficial impression, bolstered by Erdogan's angry anti-Israeli rhetoric, yields only additional question marks.

Turkey and Egypt are bitter rivals for influence in the Muslim world; if anything dramatic comes out of Erdogan's visit, it is more likely to be born in contention than in collusion.

Though both Israel and Egypt tried to downplay it, the incident on Friday very nearly turned into a disaster, and is likely to rattle their already strained relationship in a major way. Reports have it that Cairo had warned Jerusalem in advance about the danger of a mob attack. [1]

The diplomats were safely whisked out to the airport, where they boarded a plane back home, but less fortunate were six Israeli security guards who remained stranded in the embassy as angry mobs broke inside. They were finally rescued by Egyptian special forces, who smuggled them out of the embassy dressed in traditional Arab garb and headwear.

"Several hours into the mass protest in Cairo, the mob succeeded in breaking two of the three doors that led to the security room at the embassy," a report in the Israeli news site Ynet reads. "When the mob reached the final door, the guards could hear the noises from outside as well as loud bangs on the door ... Using every object they could find, the guards built barriers near the door in the hopes of preventing intrusion." [2]

Though Israeli officials claimed that the media exaggerated the danger to the lives of the guards, it is clear that the situation had the potential to turn into a disaster. Apparently, for a long period in the beginning of the standoff, Egypt's de facto ruler, Field Marshal Mohammed Tantawi, who heads the Supreme Council of the Armed Forces (SCAF), mysteriously could not be located to answer the calls of Israeli and American officials. The forceful American reaction and the massive pressure the Barack Obama administration brought to bear on Egypt were arguably decisive in arranging the rescue of the guards. [3]
To be sure, the Egyptian government made all the right noises vis-a-vis Israel after the incident, pointing out how severe the clashes were (reports vary, but four people died and around 500 to 1,000, including dozens of policemen, were apparently wounded) and announcing that it would try over 100 suspects. Condemnation of the attack poured in from many corners of Egyptian society, including from unexpected ones. [4]

However, some of the behavior of Egypt's rulers is very suspicious - not least the unexplained absence of Tantawi during a critical moment. One of the first responses of the SCAF to the incident was to reinstate the emergency laws that existed under the rule of the ousted former president Hosni Mubarak, and which were a key focus of the demands of the demonstrators in Tahrir Square. [5]

According to Kamran Bokhari, an analyst for the American think-tank Stratfor, the attack served in some ways the domestic interests of Tantawi and the SCAF:The tensions involving Israel are not exactly completely negative from the point of view of Egypt's military leadership. The Egyptian military authority is interested in delaying, as much as possible, the transition toward civilian rule. What that means is essentially postponing elections as long as possible. Given the current mood within Egypt, the military government doesn't exactly have the leverage to be able to postpone those elections.

That said, an issue like tensions with Israel can be used by the government in Cairo to be able to pull off that kind of postponement of elections. But, nonetheless, the situation right now is very premature and it's not really clear whether the Egyptian authorities will be able to make use of the incident with Israel to manage domestic politics. [6]The attack on the Israeli Embassy came at a period of soaring internal tensions in Egypt, and quickly became entangled with the growing discontent against the military rule. As Egyptian journalist Zeinab El-Gundy writes, "The Israeli Embassy crisis forced political groups to deal not only with national security and regional matters but also domestic issues, especially the decision taken by the ruling military council (SCAF) and the cabinet to revive the use of emergency laws." [7]

Against this background, therefore, it is rather odd that Turkey's Erdogan jumped on the opportunity to link his visit to Egypt, officially planned to give an ambitious boost to the ties between the two nations, to his aggressive anti-Israeli campaign following the publication of the Palmer report earlier this month. According to some reports, he might be preparing to give a fiery anti-Israeli speech in Tahrir Square in Cairo, and the Egyptian government is concerned that this would embarrass it and could incite further clashes. [8]

The Turkish government has issued a number of extravagant threats against Israel in the past week or so, including that of sending war ships to escort future Turkish aid ships headed for Gaza, as well as to harass Israeli gas mining projects in the Mediterranean.

There is a side plot to this story as well, and the show of naval might is more likely directed at Cyprus rather than Israel. "Israeli officials have said, however, the Turkish muscle flexing in the Mediterranean is aimed at Cyprus, as much as it is at Israel," writes Israeli journalist Herb Keinon. "Turkey has threatened Cyprus about going ahead with plans to begin drilling for offshore gas deposits, with Foreign Minister Ahmet Davutoglu threatening earlier this month that Ankara would show the 'necessary response' if Cyprus went ahead with the plans." [9]

Much of the Turkish campaign against Israel, and specifically the military part, is most likely bluff and bluster, yet Erdogan could potentially try to stir Muslim sentiments against the Jewish state during his trip to Egypt. These latter sentiments are extremely explosive, and could create trouble; some analysts fear that riots could start in places like Cairo and in the Jordanian capital Amman.
There are also clearly forces working to normalize relations between Israel and Egypt. Even as Erdogan landed in Cairo, a senior Israeli military official was in the Egyptian capital, ostensibly to discuss "Sinai security arrangements". [10] It is safe to assume that Turkey and Egypt are not teaming up against the Jewish state.

However, what is truly concerning is the rise of internal tensions, and the spread of chaos inside Egypt. Whether or not the government is able to stem populist anti-Israeli rhetoric - there is the possibility that it may be, in fact, secretly inciting it - it will likely take some time before the Israeli ambassador can return safely.

In the long term, Egypt is in serious danger of becoming a major source of instability for Israel and the region.

6. Dispatch: Challenges Following the Attack on the Israeli Embassy in Cairo, Stratfor, September 12, 2011.