According to frequently cited estimate, 99% of Turkish population is Muslim, but Turkey is a secular state. This Muslim population and secular state do not make an happy couple. Their marriage often produces problems and contradictions... Religion in education in Turkey is an interesting issue due to an uneasy relationship of the state with religion. According to frequently cited estimate, 99% of Turkish population is Muslim, but Turkey is a secular state. This Muslim population and secular state do not make an happy couple. Their marriage often produces problems and contradictions. In this short article I try to explore this uneasy relationship of secular Turkish state with religion by investigating how religion has beendealt with in the field of education.

The cadre that established Turkey (I mean the cadre that governed the country especially after 1924) saw Islam, or its ‘backward’ (gerici) interpretation as the prime cause of the decline and collapse of the Empire. Hence they sought to reduce the impact of Islam on state and society. For this end, they not only separated religion from the state (secularism), but also sought to control religion and promote their own ‘true’ interpretation of Islam which has been compatible with other state principles such as nationalism and secularism, through religious education and state-controlled religious organisations such as the Presidency of Religious Affairs. Alternative interpretations and the places that can promote such interpretations were condemned and banned (for instance it is still illegal to open private religious schools; moreover, dervish lodges are still banned despite that the ban is loosely applied due to practical reasons and ruling governments’ attitudes). One essential method of ‘domesticating’ religion and promoting ‘true’ interpretation of Islam has been to control religion in education.

The first assembly of Turkey opened in 1920 when the independence war was still continuing. At that time, the most heated debates focused on the topic of education, especially whether education would have a national or religious character. At that assembly, most of the representatives favoured religious education, but the cadre that seized the power in the second assembly favoured national education, thenceforth Turkish education has been a national character.

Since thefounder cadre believed that religion played its role in the decline of the Ottoman Empire, they tried, as much as they could, to reduce the impact of Islam on society. They first closed madrasas and opened Imam-Hatip schools which were soon closed in 1930. Regarding ordinary state schools, within 7 years (1924-1930) religious education lessons were gradually removed from the curricula of elementary and secondary schools. Furthermore, researches, writings, publications about religion and private religious education were banned. These all were done in the name of ‘secular education’. The following 19 years were without religion and its education. So, the generations of 1930s and 40s were raised without any form of religious knowledge (except they learned in their homes or hidden places).

Regarding Imam-Hatip Schools, in 1950, four-years Imam-Hatip schools were introduced. In 1955, this schools were increased to seven years. In 1971, middles section of Imam-Hatip was closed, but during the 70s imam-Hatip schools transformed from vocational schools into mainstream educational institutions especially due to the National Salvation Party's membership of a number of coalitions with Nationalist Front governments. In the period of 28 February 1997, middle section of these schools was again closed. Moreover, these schools are reclassified as ‘vocational high schools’ and thereby their graduates were penalised on the university entrance exam (an automatic point deficit) if they wanted to go faculties apart from Divinity Faculties.

However there are still important problems to be solved.

The content of religious education is still prepared by the state and the state teaches what it wants, rather than what proper religious education should teach. The state uses religion in education for political ends. As one commentator notes, ‘the state makes sure that children aren’t brainwashed into unauthorized interpretations of Islam by brainwashing the children first with authorized interpretations of Islam’ (Shively, 2008:702).

If one looks at the books used at ‘religious culture and ethics knowledge’, he can easily see these issues: One important component of this authorised interpretation ofIslam is that it is compatible with secularism and the philosophy of Ataturk: needless to say that at the beginning of the every book, there is the portrait of Ataturk and his address to the youth. Moreover, a book called ‘Atatürkçülük (Volume 1, 2, 3, MEB, İstanbul, 2001) is one of the reference book for every book used in these lessons. in almost every book, there is a section, or page devoted to Ataturk’s understanding of Islam or secularism. For instance, in the book taught in 7th grade, there are three pages devoted to secularism (pp. 146-148) or in the book taught in in 8th grade: there are three pages devoted to Ataturk's words on tolerance and Islam (pp.86-87). Interestingly, in a section titled ‘worship beautifies our behaviours’in the book taught in 5th grade, we came across a page that mentions benefits of having secularism (p. 53).

Another problematic issue can be came across is the headscarf issue:  according to Quran (Nour, 31) the headscarf is mandatory for every female Muslim, but the presentation of headscarf in religious culture and ethics knowledge books is problematic: The only headscarfed females in the books are grandmothers (even in these pictures a part of grandmothers’ front hair could be seen) and young girls who are praying. The message given is clear: you are better to wear headscarf only when you are praying and when you are old enough. You can be a very good Muslim even without headscarf.

As far as I am concerned, state education does not mean everything, but it matters, not least because young people spend a significant part of their daily life in state schools. My final recommendation will be that the best schools will be the schools which have the least state regulation and control, especially if the state is secular. It is time for the state to leave education to non governmental (or civil) and religious organisations. 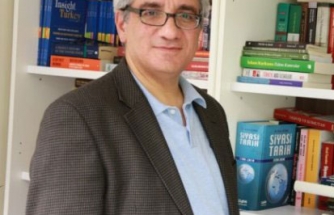