The crisis in capitalism

What it all boils down to is the elite's fear of any widespread critical discussion of the capitalist system and its American forms. 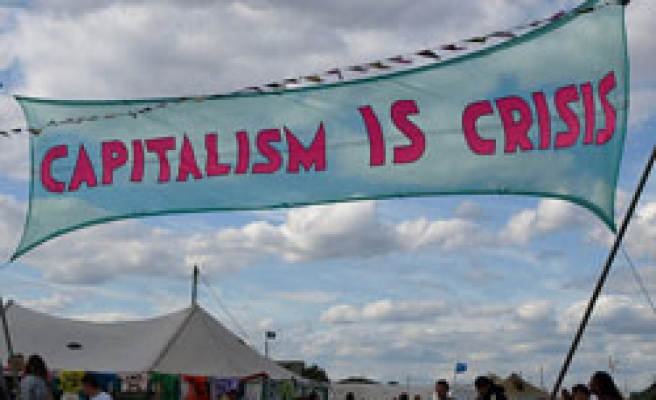 
Whether it’s a Western type democracy or a totalitarian dictatorship, every government unfailingly seeks to embellish its own ideology.

This is not to minimize the major differences between and within divergent societies and their dominant elites and institutions. Rather, it is to heighten our awareness of the self-aggrandizement which characterizes human societies.

You can see it in the patriotic fervor that is so widely nurtured, and in the celebratory descriptions of whatever socio-economic system has been instituted.

IN dynamic societies like our own, the economy undergoes continuous change, often by legislative acts arising from struggles between and within the classes of that society. Capitalist economies, including ours, are also affected by such diverse but interrelated factors as new inventions, more sophisticated machines and technology, business cycles, domestic and foreign policies, including internal and external competition for wealth and living standards, monopolization, and globalization.

In the period of advanced industrial American capitalism, the best known and most disastrous economic crisis has been the Great Depression, which actually was global in scope. It led to Franklin Delano Roosevelt’s New Deal in the 1930s, which significantly strengthened the social safety net, especially with the enactment of Social Security.

This and other fundamental New Deal reforms of U.S. capitalism were of course very controversial and strenuously opposed, then as now, by the more conservative Republicans. Among the wealthy, FDR was regarded as a traitor to his class, although others viewed him as the protector if not savior of American capitalism.

THE social and economic struggles over New Deal type reforms have not disappeared. Far from it. Conservatives have continued to fight like tigers to keep corporations and the market free from government-mandated regulations (just look at the passionate Republican opposition to the recent financial overhaul, weakened as it was).

In short, there is well-orchestrated opposition to any legislation that would lessen the enormous power that the corporate sector holds in the U. S. economy and politics, and, for that matter, in the world, now deeply penetrated by the globalizing multi-national corporations.

Conversely, the rapid rise of organized labor under the New Deal (receiving its decisive legislative impetus from the Wagner act of 1935) has been continuously and effectively fought by pro-business forces, including their vast army of corporate lobbyists, not a few of them former senators and representatives. The anti-labor legislation that followed on the heels of FDR’s social reforms was epitomized by the anti-union Taft-Harley act of 1947 (which labor leaders of the time labeled a “slave-labor” law). The percentage of workers enrolled in unions has shrunk drastically during the past decades.

A front page article in The New York Times (July 16) reminded readers that both parties “over the last-part century” passed a succession of far reaching bills that “allowed financial companies to become larger, less transparent and more profitable.” In addition to putting aside usury laws in a climate of government-hands-off-business policy, “the bulk of financial activity moved into a parallel universe of private investment funds, unregulated lenders, and black markets like derivative trading.”

Our current crisis, referred to by the media as the “Great Recession”, has elicited numerous analyses and commentary by economists, politicians, and the punditocracy. As the Dow raced downward and as some of the biggest corporations and banks sought rescue – which they got, with the approval of both President Bush’s and President Obama’s administrations and the Congress, the commentators scoured their brains to find words to describe what was happening. One word they seldom found was “capitalism”.

The current capitalist crisis is an economic disaster second only to the Great Depression in the ways it affects most of our people and causes ever more suffering of the poor, the unemployed, members of the middle class, and especially children.

THE financialization of our form of capitalism, accelerated in large part because of its huge short-term profitability, has increasingly replaced the U.S. manufacturing sector as a source of outsize profits.

Productive and innovative enterprises in the once highly successful manufacturing sector have long ago been ceded to China and other industrial and industrializing nations.

Many U. S. manufacturers have moved their factories overseas, often without regard to the thousands of workers left behind. In the years preceding the 2008 crisis, the financial sector raked in vast profits, salaries, and bonuses by trading mortgages, bundling derivatives, venturing speculative investments, and risky betting.

The huge taxpayer-guaranteed bailouts, designed to safeguard leading capitalist corporations, were handled by Bush’s Secretary of the Treasury Henry Paulson (former CEO of Goldman Sachs) and Obama’s Treasury Secretary Timothy Geithner (former president and CEO of the Federal Reserve Bank of New York). Moreover, several of Obama’s economic advisers, including Lawrence Summers, were avid supporters of the deregulatory regime that helped bring about the crisis.

WHILE there’s plenty of handwringing over the mounting national deficit (led by Republicans), far less is said about how Bush’s huge tax cuts for the wealthy, plus the enormous costs of the Iraq and Afghanistan wars, plus the rapidly growing economic inequality, have added massively to the deficit. As former Secretary of Labor Robert Reich points out, the majority of Americans lack “the purchasing power to buy what the economy is capable of producing” (“Inequality in America and what to do about it” (The Nation, July 19-26).

This brings me to the question of why the mass media reports, analyses, discussions, and political debates avoid calling our system “capitalism” and the crisis within it “a capitalist crisis.” Instead, they generally limit themselves to the terms “financial” or “economic” crisis, or simply refer to the “system.”

Still, hardly anyone in our population thinks that the economic crisis we have been facing is a feudalist or socialist crisis, apart from some Tea Party types who think that Obama is a communist or seeks to convert our capitalist system to an autocratic socialist system. (One wonders whether some extremists on the right won’t soon accuse Obama of scheming to install a Stalinist gulag to supplement Guantanamo.)

THE guarded way of referring to the ubiquitous economic mess is not confined to the corporate media, but also is practiced by politicians, mainstream foundations, and the government itself. Paradoxically, back when European criticism of American “adventurist capitalism” was heard, President Bush explicitly defended the U.S. form of capitalism.

Probably the mainstream media, and the establishment generally, shy away from the use of the term “capitalism” because of their apparent concern that the word has a negative connotation for many people, and that, particularly in an economic crisis, its use might reinforce existing or latent doubts about capitalism.

Too, it’s not unlikely that most journalists and other professionals are hesitant to use the word because it might be interpreted as being critical of capitalism, the very system that feeds them.

ACTUALLY, most liberals, like the vast majority of voters, are not at all opposed to the capitalist system within which they have been raised and educated. At most, they advocate more progressive policies and a more regulated capitalism, which they believe would be fairer and benefit more people.

What it all boils down to is the elite’s fear of any widespread critical discussion of the capitalist system and its American forms. For, in spite of the Supreme Court’s recent expansion of the supposedly constitutional “personhood” of corporations (by giving them “free speech rights” to spend their vast financial resources to influence elections in our republican democracy), the fact is that genuine free speech by people, involving conservatives, liberals, reactionaries, and radicals, discussing the merits and demerits of capitalism in the public market of ideas, is persistently discouraged by the corporate elites.

Dr. John J. Neumaier was president of SUNY New Paltz from 1968-72. His column appears periodically in the Sunday Freeman.