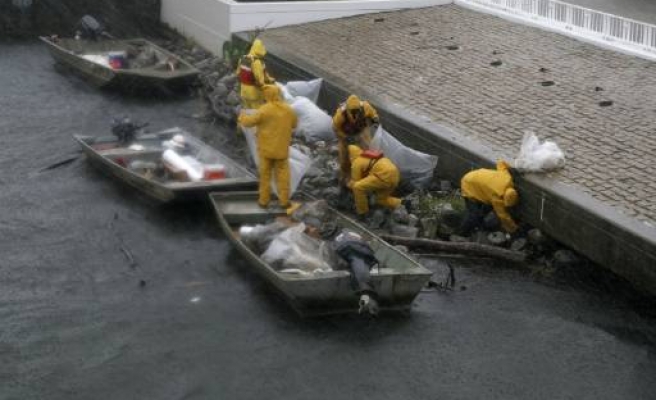 A tropical depression has left two people dead and nine others missing after slamming the central and southern Philippines, the country's disaster agency said Friday.

A man and a woman died from drowning when the storm – known locally as "Queenie" – hit Malabuyoc town of central Cebu province Thursday, the National Disaster Risk Reduction and Management Council said.

Only six of the reported nine missing people have been identified while a 30-year-old man from the nearby island province of Bohol was injured, according to an update issued by the council.

Queenie intensified into a storm Friday and has displaced around 1,617 families -- or 7,528 people -- in Central Visayas region and parts of Mindanao,  the country’s second largest and southernmost major island.

The majority of those displaced are temporarily sheltered in 31 evacuation centers.

The tropical storm, the 17th to hit the Philippines this year, also destroyed at least 103 houses, partially damaging 374 others.

An overflowing river has left a bridge in Central Visayas impassable and five foot bridges were destroyed in Mindanao, while nearly 900 passengers remain stranded at eight ports in the two regions.

The government has extended 166,902 Philippine pesos (nearly $4,000) worth of assistance to affected families in Mindanao.

As of 4.00 (22.00 Thrusday Turkish time), Queenie was spotted 120 kilometers (around 75 miles) north of Puerto Princesa City in easternmost Palawan province with maximum winds of 55 kilometers per hour near the center, according to the Philippines’ weather bureau.

It is forecast to move west northwest at 24 kilometers per hour and expected to exit the country Friday evening as it heads for Vietnam, weather bureau forecaster Samuel Duran reported.

The bureau has alerted residents in low-lying and mountainous areas with storm warnings against possible flashfloods and landslide, while fishermen are advised not to venture out over the seaboards of Palawan.

The Philippines is located on the Pacific ‘ring of fire,’ making it prone to typhoons and other natural disasters.

Every year, an average of 18 to 20 storms visit the country.