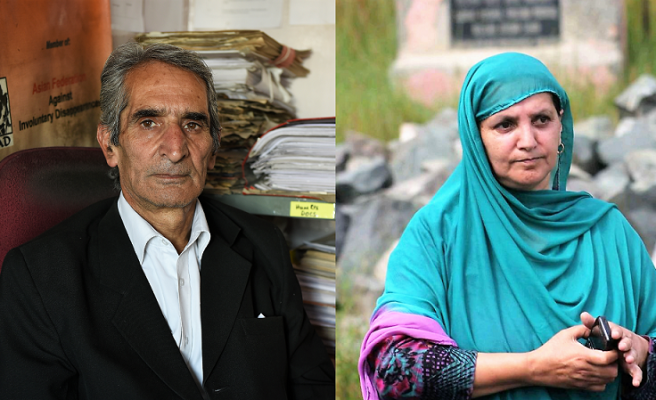 Two prominent Kashmiri civil rights campaigners have been awarded the Rafto Prize for human rights for 2017.

"Parveena Ahangar and Parvez Imroz have long been at the forefront of the struggle against arbitrary abuses of power in a region of India that has borne the brunt of escalating violence, militarisation and international tension.

“Their long campaign to expose human rights violations, promote dialogue and seek peaceful solutions to the intractable conflict in Kashmir has inspired new generations across communities," the Rafto Foundation for Human Rights, based in Bergen, Norway, announced today.

Ahanger, head of the Association of Parents of Disappeared Persons (APDP), became the face of Kashmir's struggle against enforced custodial disappearances by Indian forces in the disputed region after her son was picked up by Indian forces in 1990 and never returned.

According to the group, more than 8,000 people have been subjected to enforced disappearances by Indian forces.

Speaking to Anadolu, Ahanger said: "The real prize for me is the struggle itself, to keep fighting against the Indian occupation in Kashmir and keeping the hope for justice alive. This award is a recognition of the fight we have put up and that we must continue our fight."

Parvez Imroz is a lawyer and leading human rights activist who uses the law to ensure fundamental human rights and equality before the law in Kashmir.

Imroz founded the Jammu Kashmir Coalition of Civil Society (JKCCS), which works for human rights and has brought out detailed reports about enforced custodial disappearances and identified perpetrators of state violence in Kashmir, and recently issued a report about the relationship between militarization and natural calamities in the disputed region.

"I am glad about the award because it sheds light on the violence that the Indian state has been perpetrating in Kashmir and punctures the Indian claims that all is well in Kashmir," Imroz told Anadolu Agency.

"It will also give us an opportunity to go to Norway and tell people the kind of work we are doing and the violence people are facing here. European organizations have responded well to the struggle of civil rights in Kashmir, and this award is a continuation of that."

The Rafto Prize is awarded annually to individuals or organizations that have distinguished themselves in their work for human rights and democracy, according to the Rafto Foundation for Human Rights.